I am planning to celebrate Passover this year. I did a basic little one when I was a seminary teacher for my class and it was pretty fun. Fast forward to a couple of weeks ago - I saw Passover on my calendar for April last month, so thought I would plan some things do for this year now my children are a little older.

Whilst we are not Jewish or have no need to celebrate it, I thought it would be a good reminder about Moses and the Israelites. Passover starts sundown 19th April, I think the dinner is held on the 20th April. Here is some of the information I found on the internet.
I know very little about Passover so I hope I have it right. The meal is called the Seder (the first e is pronounced like a long a) With its Passover dishware and silverware, the Seder table is different than the regular dinner table. The centrepiece of which is the Seder plate, a special plate containing the 5 foods that remind us of the struggle of the Israelites in their quest and journey to freedom 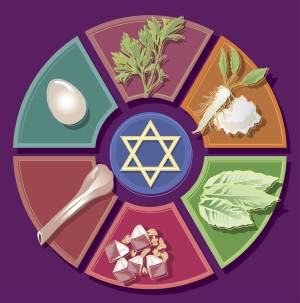 1. Charoset -A mixture of chopped apple, walnuts, pecans, honey, orange zest cinnamon that represents the mortar the Jewish slaves used to assemble the Pharaoh's bricks
2. Parsley (dipped in salt water) Symbolizing Springtime, it is dipped in salt water to remind us of for the tears of the Jewish slaves
3. Boiled egg Another symbol of Spring
4. Shank Bone Symbolic of the sacrificial lamb offering, the bone can come from whatever the family is eating, such as the leg bone of a roasted turkey
5. Bitter herbs Freshly grated horseradish reflects the bitter affliction of slavery
Three pieces of matzoh (flat bread) are placed in a Matzoh Cover (a cloth sleeve or envelope) and placed in the center of the Seder table. Before the meal begins the middle matzoh is removed and broken in half. One half is returned to the Matzoh Cover, the other - the Afikomen - is hidden, to be hunted by the children at the end of the Seder meal. The child who finds the Afikomen wins a special prize. Some homes break the Afikomen in to many pieces assuring that each child present can find a piece and receive a prize .
They dip their finger in the wine (use water or grape juice) to say thanks they say a word that sounds like DIEYAN that means "he did enough." They break flat bread to begin the meal.
During the Seder 4 glasses of wine ( I will of course use sparkling apple or grape juice!) are poured to represent the 4 stages of the exodus
1. freedom
2. deliverance
3. redemption
4. release
A fifth cup of wine is poured and placed on the Seder table. This is the Cup of Elijah, an offering for the Prophet Elijah. During the Seder the door to the home is opened to invite the prophet Elijah in.
At the Seder the Haggadah -The Book of Exodus, is read and the history celebrated with its stories, songs and prayers - We can read the story of Moses and Israelites from the Bible.
At the Seder it is the youngest child at the table that answers the 4 questions asked at Passover.
*On all other nights we eat all kinds of breads and crackers. Why do we eat only matzoh (hard crackers) on Pesach ? Matzoh reminds us that when the Jews left the slavery of Egypt they had no time to bake their bread. They took the raw dough on their journey and baked it in the hot desert sun into hard crackers called matzoh.
*On all other nights we eat many kinds of vegetables and herbs. Why do we eat bitter herbs, maror, at our Seder? Maror reminds us of the bitter and cruel way the Pharaoh treated the Jewish people when they were slaves in Egypt
*On all other nights we don't usually dip one food into another, at our Seder we dip the parsley in salt water and the bitter herbs in Charoset why do we dip our foods twice tonight? We dip bitter herbs into Charoset to remind us how hard the Jewish slaves worked in Egypt. The chopped apples and nuts look like the clay used to make the bricks used in building the Pharaoh's buildings We dip parsley into salt water. The parsley reminds us that spring is here and new life will grow. The salt water reminds us of the tears of the Jewish slaves
*On all other nights we eat sitting up straight, why do we lean on a pillow tonight? We lean on a pillow to be comfortable and to remind us that once we were slaves, but now we are free
After the meal is eaten, the children search for the Afikomen. The Seder is finished when the children have found the Afikomen and everyone has eaten a piece.
The Haggadah itself stresses the importance of the Seder as "a spectacle meant to excite the interest and the curiosity of the children." Everything in the Seder is meant to make the children curious and to ask questions.
After you have eaten the seder you can celebrate with a family dinner, roast etc – whatever foods you would celebrate with. You could do the whole seder, or just take aspects of passover to use as a teaching moment.
Enjoy having Passover and the joy of being with family.
Posted by This Girl loves to Talk at 1:49 PM