For weeks all Miss G has talked about is Cupcakes! So cupcakes she got. We even got a cupcake Tree from Grandma a week before!! Perfect timing!! And she didn't even know we would need one 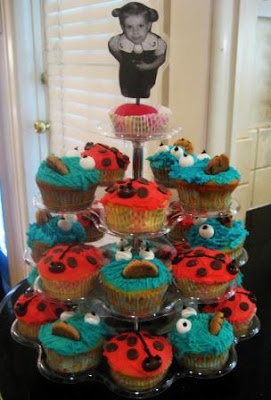 Odd mix of Cookie Monster Cupcakes and Ladybug cupcakes but it was what she wanted!! I think though that she thinks the blue ones are Sully from Monsters Inc.. anyway she called them "Mot Mot" Cakes. 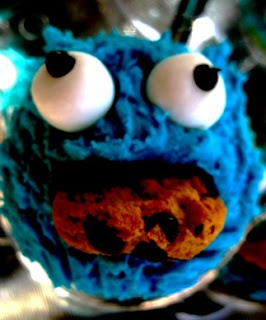 Cookie Monster Cupcake Idea from Cupcakes and All things Sweet Hers are more professional though!! I don't have any piping bag things, so I just ran a fork along the icing for a bit more of a 'fur' look. I also used Mint balls (kool mints) for the eyes, I wasn't rolling any icing ;) 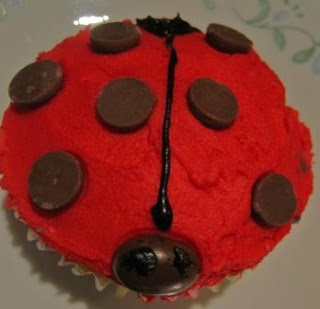 Ladybug Cupcakes Idea came from Google Images - I copied These ones I will say though, I think the choc chips were too tempting for little kids. After the party I found about 5 or so cupcakes around the yard all missing their choc chips, but the rest of the cake not eaten. I don't think any kid that took a ladybug cake ate it - Just a note :)
Posted by This Girl loves to Talk at 5:03 PM

You did such a wonderful job! Will you make me cookie monster cupcakes for my b'day?

I would be looking at the adults for the abandonded cupcakes ;-)

Love you AND your blog.