Put a Candle in it.. 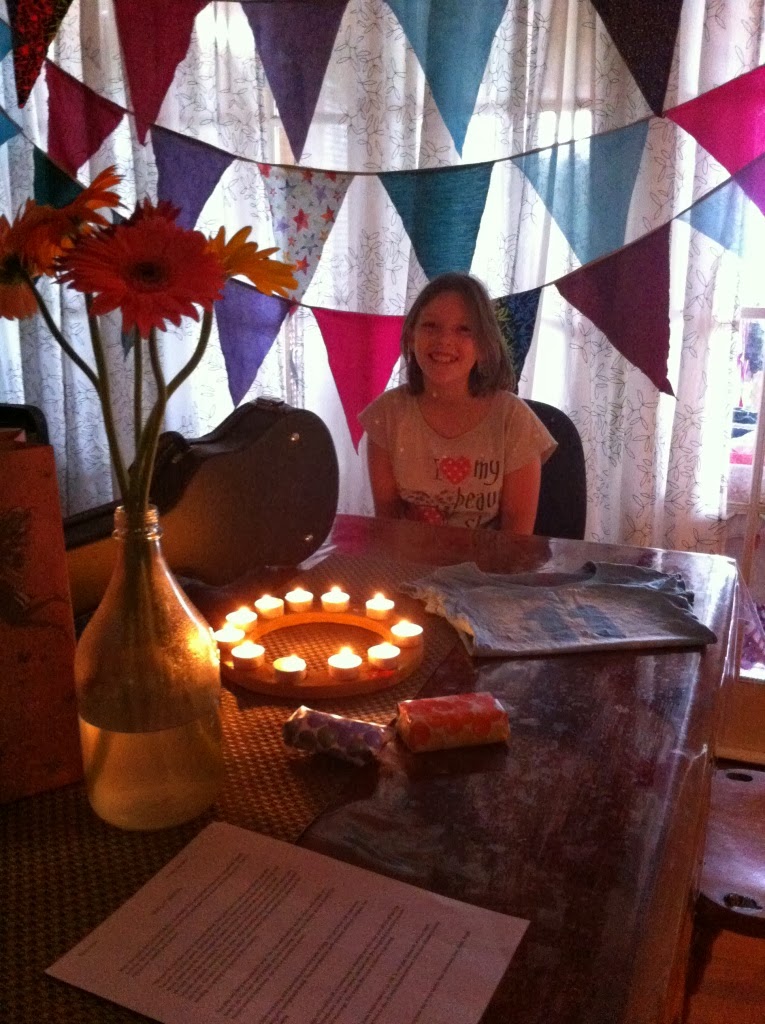 That's pretty much our motto for birthdays around here.

Everything is better with a candle


{some years I've even gotten away without having a cake... cause hey we've put a candle on a doughnut!!} 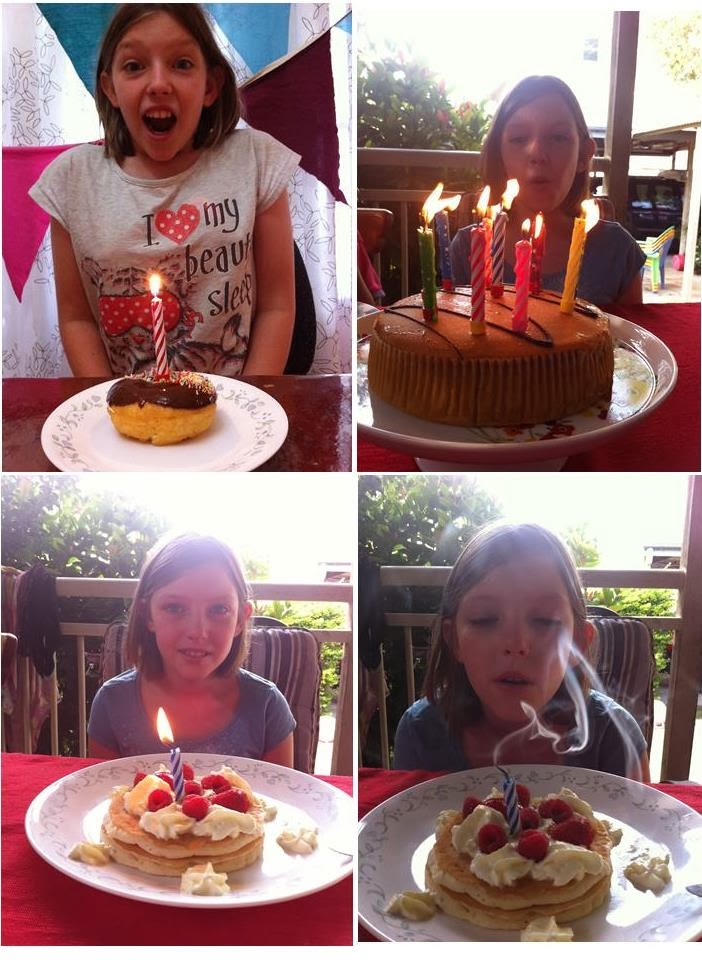 She's a smart girl cause usually the kids get choice of breakfast and often they choose doughuts or pancakes. She smartly said can I have both? And also begged for Caramel mudcake from the shops. This is what she really wanted {A $5 shop cake?? how can I deny??!!} Gee kids really are easy sometimes.


So now I officially have two kids over 10! where do the years go! 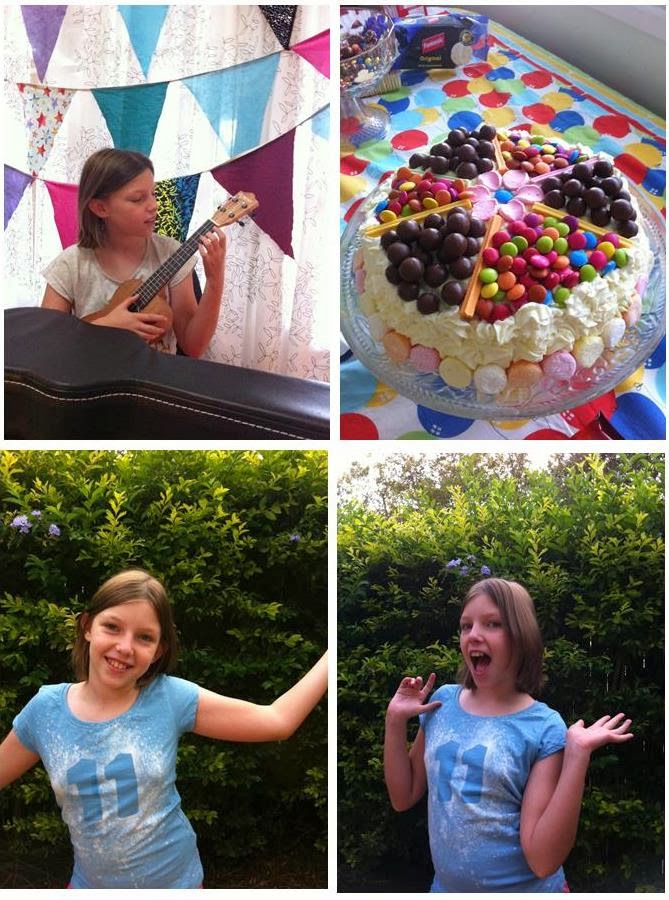 This girl always asks for the easy parties - she likes moving.


This year she wanted skating. Very simple and easy. 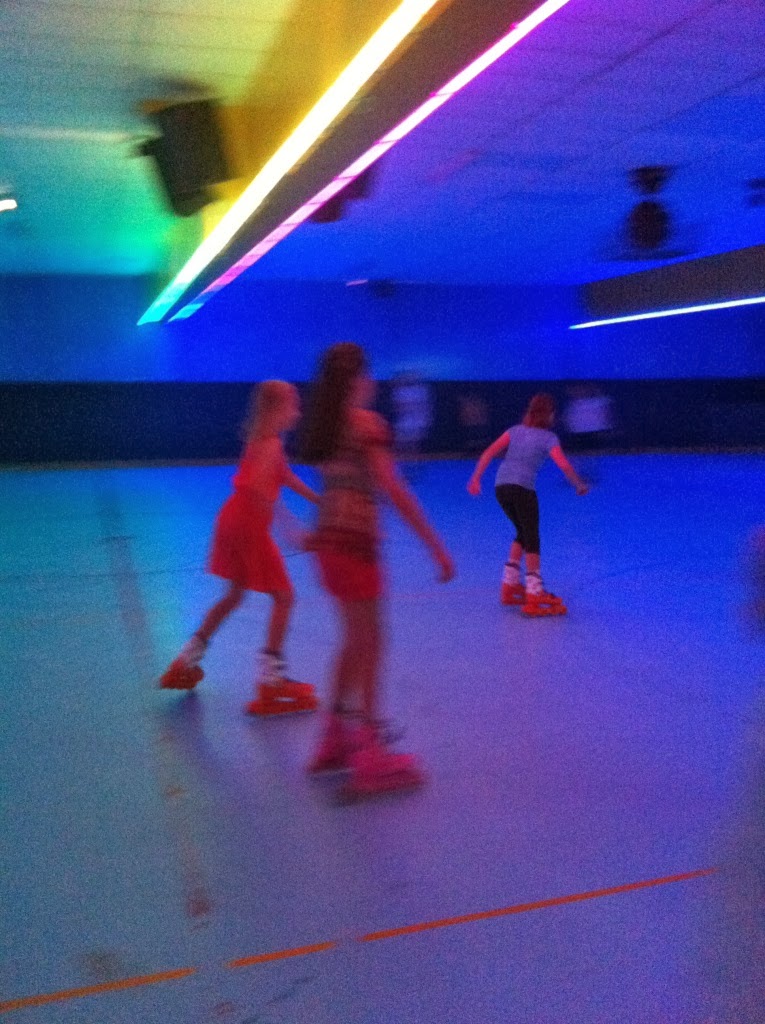 Thanks to my sister who made the awesome lolly cake and mum for hosting eating before skating.
Thanks to the 10 kids whom kept all their body parts unbroken!
{my only stress, kids breaking something skating while no other parents around!} 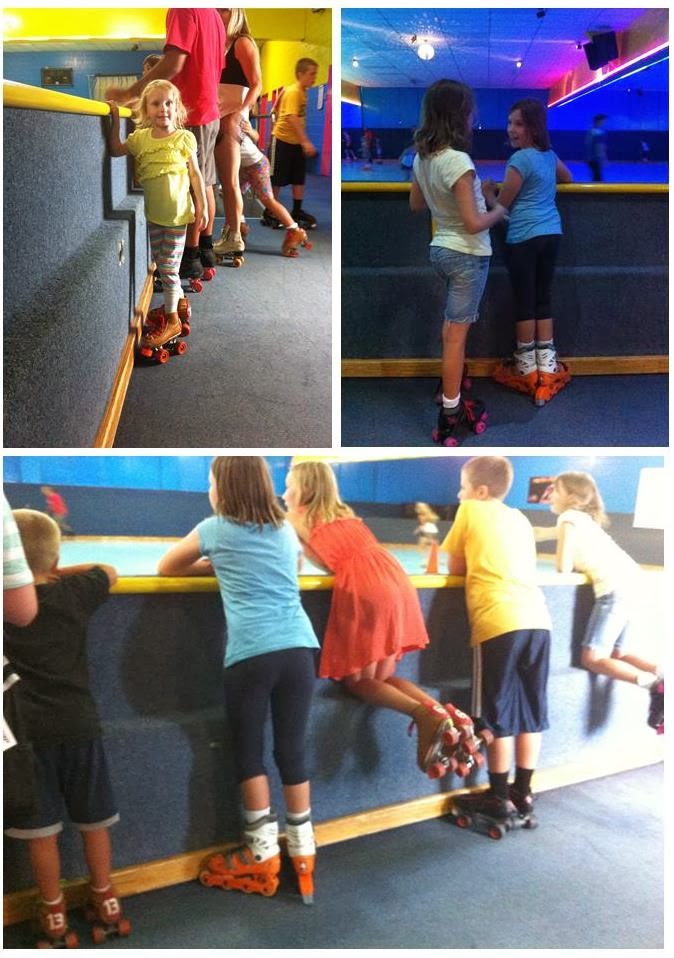 Another Birthday done and dusted and another one coming up next week.

Since us adults are studying the Old Testament in Sunday School this year - It reminded me to create some FHE lessons from there in the coming year for the children.


Scripture: This lesson based on Genesis 6 - 9


Ask children to find toy animals (that you have previously hidden all around the house) and bring them to the ark (I used my fisher price plastic ark – if you don’t have similar make one out of cardboard or have a drawn picture stuck on the wall, or a feltboard) Have children rock the boat while you talk about how long the ark was in the water. Noah and his family and the animals were looked after by God and landed on dry ground eventually. God put a rainbow in the sky as a promise that he would not flood the earth again.

Action Song
Noah built an ark so big (outstretch arms);
He knew just what to do (place finger on side of forehead).
He hammered, sawed, and measured (make motions as indicated)
As he’d been commanded to (nod head).
And Noah called his family (beckon with arm)
To march onto the boat (march quietly in place)—
And, two by two, the animals (hold up two fingers)
Came aboard to float (make floating motion with hands).
The heavy dark clouds gathered (place hands above head),
The rain began to fall (wiggle fingers imitating rain)—
And all the earth was covered (make a sweeping motion with hand and arm);
There was no land at all (turn head from side to side).
The ark just floated safely (make a floating motion with hands)
Many a day and night (put hands together on one side of face),
Until the sun came out again (place arms in a circle above head)
And shone so warm and bright.
And all the water dried right up (cross arms across chest);
Dry land did appear (open arms and extend hands).
Noah’s family gave their thanks (bow head and fold arms)
That God was always near.
(Adapted from a verse by Beverly Spencer.) 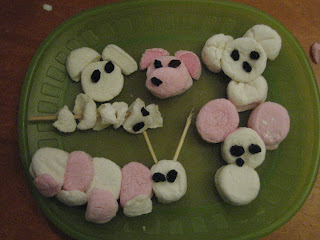 FHE Lesson {What do you love}

Opening Song: Love One Another

If you chose to celebrate Valentines you could firstly have a short discussion {or introduction} to expectations, what individuals would like to have happen on the day this week.  It could be a nice family dinner and dessert, a special heart shaped pancake breakfast or chocolates.
Or set a plan in motion for what the kids could do FOR YOU on Valentines ;)

Set and discuss goals to do a secret kindness for someone else this week
{help siblings, bake something for a neighbour/friend, do something special for mum and dad}

Discuss how and why we should love others {John 13:34} 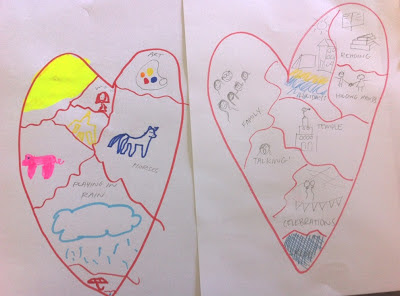 Basically draw a heart with several small compartments.
Inside each space draw a thing YOU LOVE.

Leave Heart Maps up for the week to remind us of the real things we LOVE.

We are thankful for all the wonderful blessings and things to love in our lives.

By focusing on real love we can avoid commercialization of Valentines Day.


Closing Song: Jesus Said Love Everyone
Posted by This Girl loves to Talk at 1:31 PM No comments: 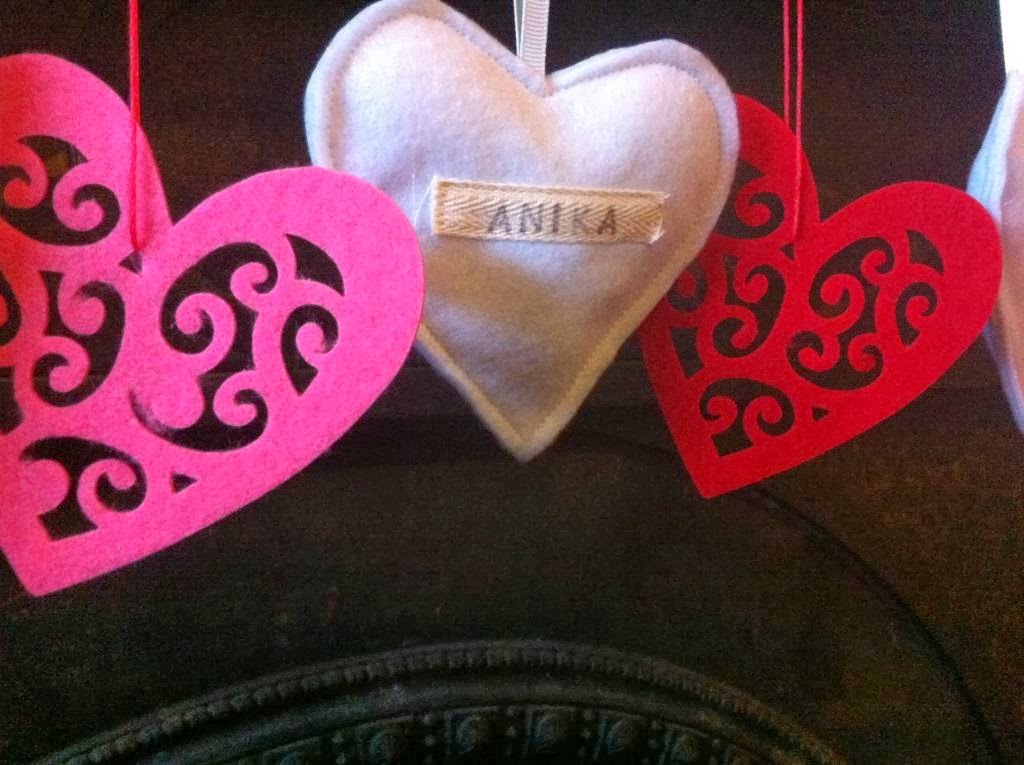 I had pinned these lovely white minimalist felt hearts to make at Christmas.
As I love to make personalised ornaments every year.

But alas as usual many things have to be left to the side undone.

As I was debating some Valentines décor....

A thought came... well why not those white hearts? Double Duty in Decorating...

and only 2 months late!

With kids back at school I sat down and made these in a morning.

Been a while since I've done some craft.


So if anyone wants to create similar here is how I made them.


Gather:
Twill ribbon {I got mine spotlight $1.30 m I was upset they had no thin white though!}
letter stamps
ink pad
White felt
Thin ribbon or twine 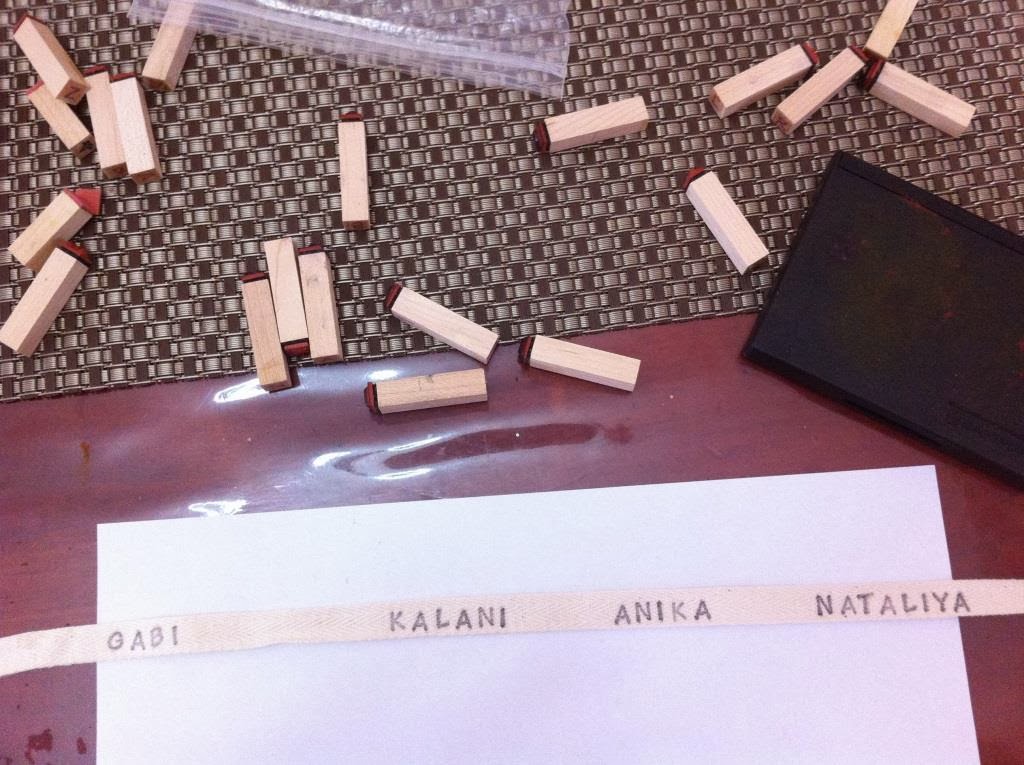 Stamp names straight onto ribbon. Set aside to dry.


Use as a template to cut around felt. 2 pieces needed to make each heart.

Sew twill ribbon name onto the middle of one heart 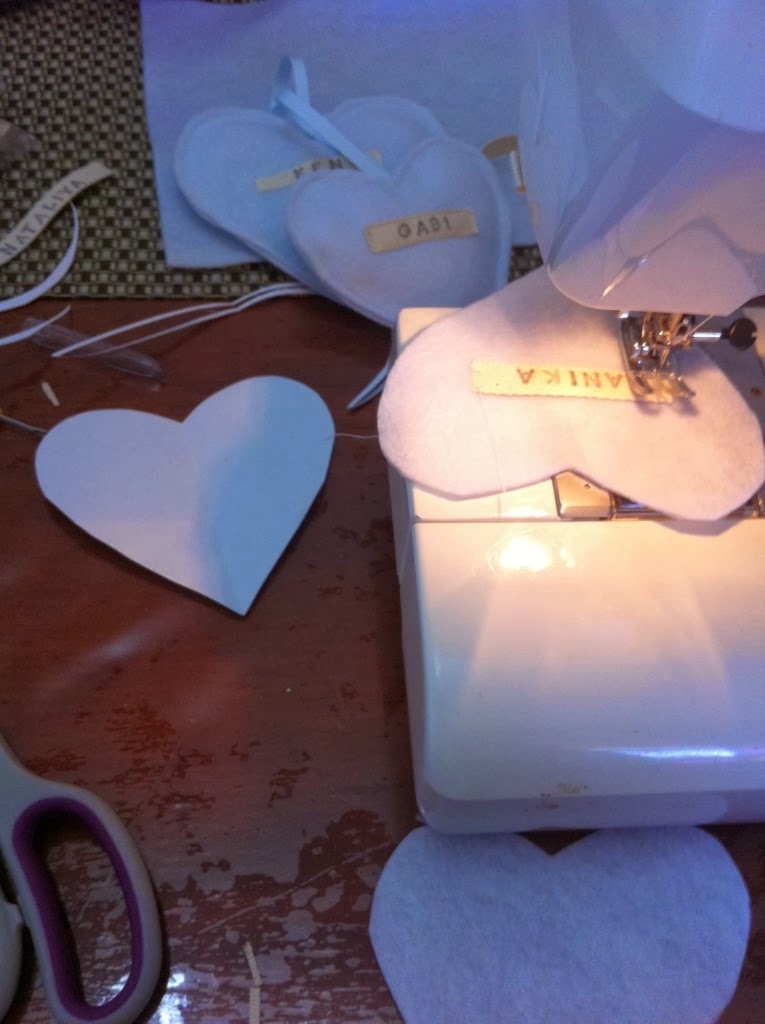 Place two hearts together, right sides out and sew along edges. At the top of the heart insert some ribbon or twine in a loop and sew over it as you go around.

Leave a little opening and stuff with a tiny bit of stuffing. Continue around heart and close up. 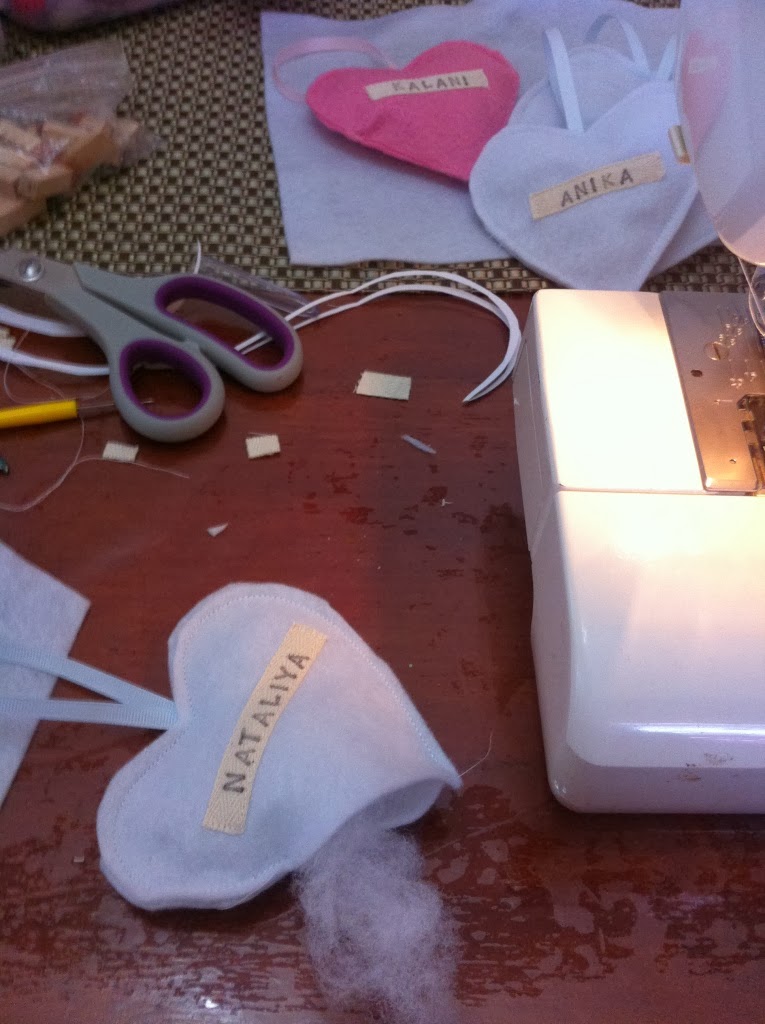 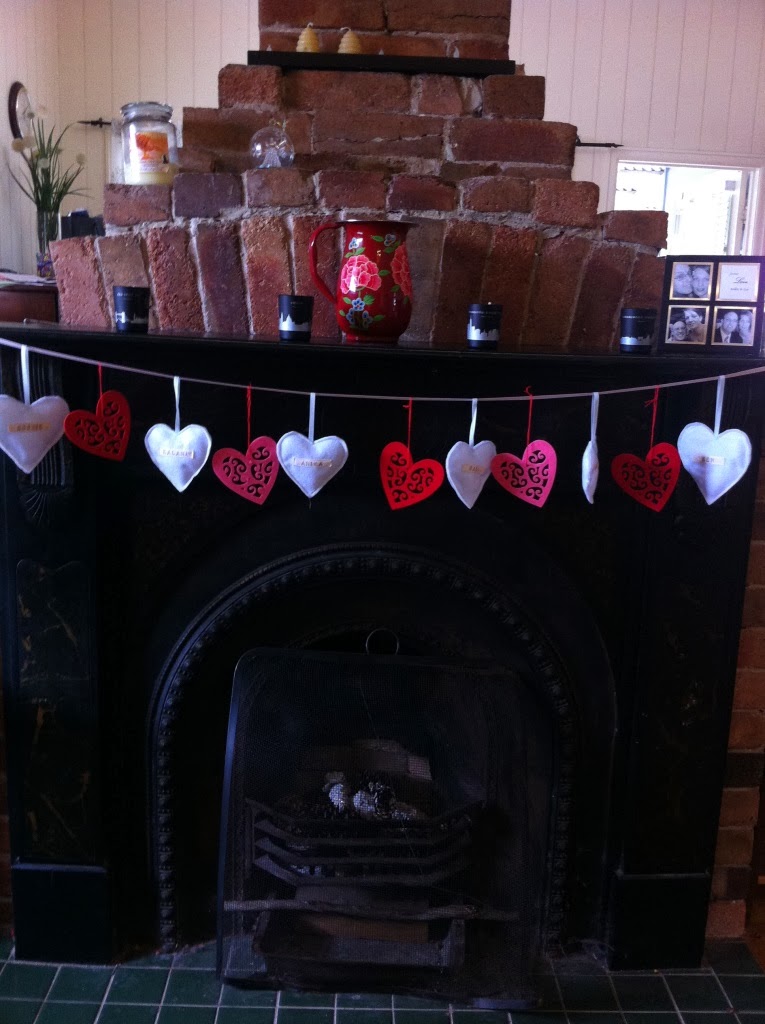 The pink and red hearts also featured were purchased from Riot Art and craft ~ 12 for $3.95 Posted by This Girl loves to Talk at 4:10 PM No comments:

Email ThisBlogThis!Share to TwitterShare to FacebookShare to Pinterest
Labels: craft 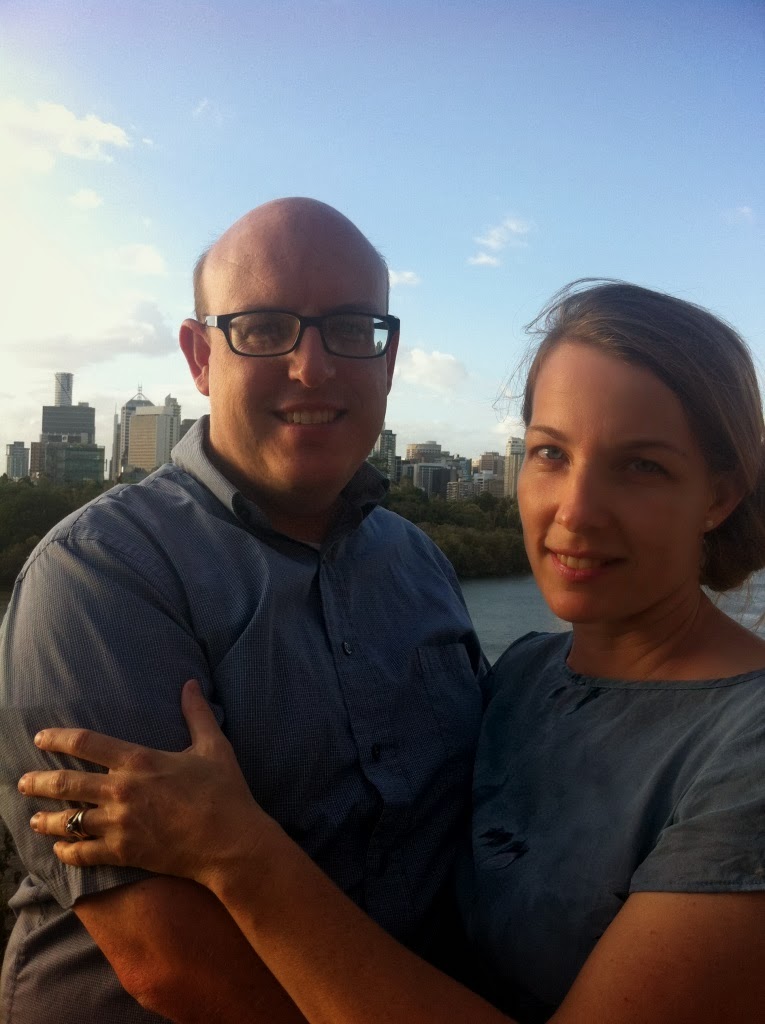 When a man suggests taking a photo ?
Well you jump at it no?

January 1999 we took a bunch of photos just before our engagement party .
Photos at the time were taken by my dad.

Dad happened to be over the other day so we even recreated it with the same photographer.

The only problem was did we have the strength to jump over the stone wall and teeter on the edge of the cliffs  anymore? {we made it - but barely!}

I even still have the same dress! I wore it for a few years then resigned it to the back of the cupboard.
It seemed too special to me to throw away.
Sadly the material has disintegrated a fair bit and the dress had lots of holes all over.
Happily I still fit the dress!! {barely} Hooray!


February is our Wedding Anniversary so a perfect timing to share embarrassing photo recreations.

It's actually kinda a hard job to recreate a photo. So they aren't perfect but good enough for a laugh. 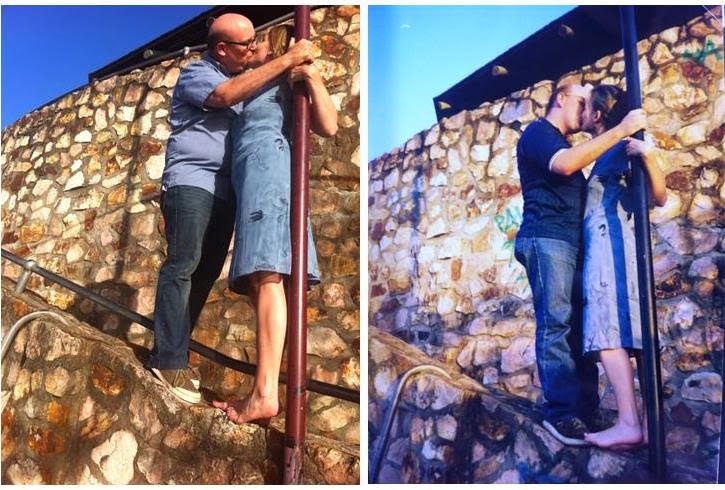 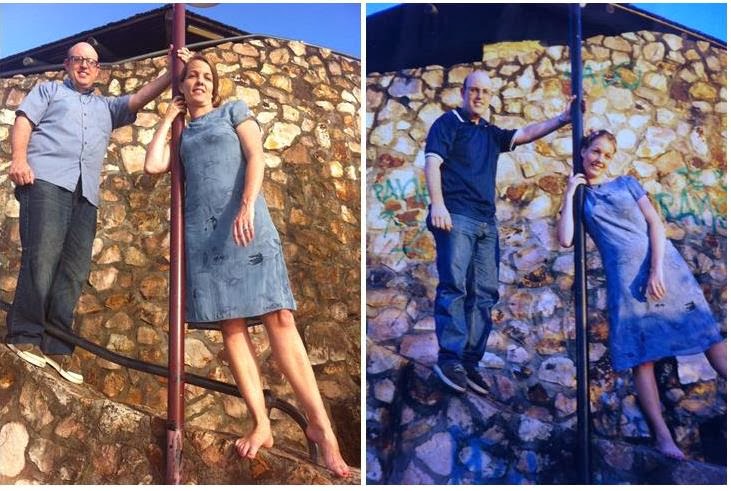 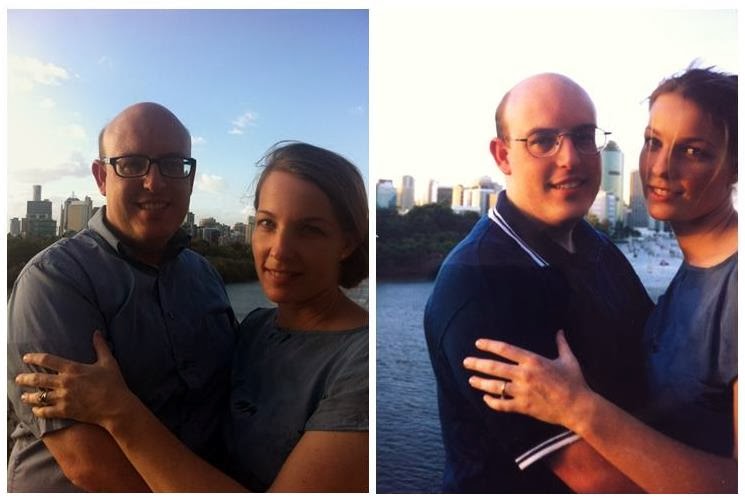 I'm so glad to have been able to spend 15 years with this guy. In some ways I haven't known any other life, in other ways it seems but a fleeting moment and I would always beg 'but it hasn't been long enough!' if we were parted tomorrow. Sometimes I feel time is flying by and that I really should make better use of our time together. Before we know it we will be old. I don't want to regret anything or any missed moments. But I am happy that we are here 15 years later and are blessed enough to even be able to recreate those special moments. xx﻿
Posted by This Girl loves to Talk at 12:53 PM 2 comments:

Place a big sheet of paper with LOVE written in big letters in the middle on the floor.
{or on a whiteboard}

Who should we show love to?

Have children write and drew their answers all around the piece of paper.

I am going to challenge the girls to love someone a little extra this week.

I will check with them to see what things they can do for someone whom they don't always get on with. eg. Classmates, their own sisters ;)  (eg share things with them, give a compliment, hold their tongue when they want to answer rudely back, invite them over, do a service for them)

Closing Song: We are Different #263

Treat: Heart Chocolates! And maybe some to give away.

Posted by This Girl loves to Talk at 4:33 PM No comments: