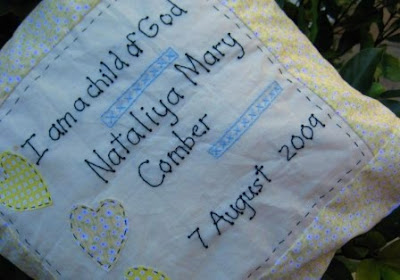 HA! had you all... of course it was a last minute entry into the name race. I broke so many of my naming rules!! That's what happens when the MR has to be involved!

WE have had Talia on a baby name list since our first daughter. But we have a few friends who named their children that, so off the list it went. It was on there because it means 'dew from heaven' something that has sentimental reasons to me from something THE MR said to me when we were first married... (ANYWAYS.. moving on)

BUT Nataliya means "Birthday" - Christ's Birthday to be precise (All good if you are born around Christmas) and Mary means "Sea of Bitterness" (OH OH - but I shall go with if it is good enough for the Mother of Christ, its a nice name - but it was chosen as all the girls have family history names, not because of religion) and we usually steer clear of Mormon/churchy names!!!

Oh and I got the spelling off some movie credits - The MR suggested he like the name Natalia and we were watching a movie and one of the actors real names was Natalya - I said I like - so if you need Baby name inspiration watch movie credits :)

so now the girl has the most religious name in the world!! I had to figure out reasons why.. Important to the crazy brain that is mine :)

So here is the TMI (TOO MUCH INFORMATION PART)

This precious one was a surprise (not expected, doesn't mean not wanted, but a surprise none the less :) So at first all those selfish feelings of 'I dont want to be sick, can we?, oh my, etc etc surfaced.

A month later I had the scariest week of my life as I suffered miscarriage symptoms. And felt immediately GUILTY!! for the previous thoughts! I spent Christmas deep in thought and in love with this unborn baby, wishing it to live. I also had the ultrasound that gave us the good news that she was indeed a tough survivor and a miracle on my birthday (just after Christmas) (why I thought having that type on potential bad news delivered on my birthday would be a good idea???? Lucky it turned out to be a wonderful birthday present)

ANYWAY - this is my reasoning to why I like her name AND it's Meaning :)

Liya
Taliya
Tali
Nali
Ya ya
Ta Ta
Na Na
Posted by This Girl loves to Talk at 4:12 PM

It is a lovely name. One of mine means "Land of lakes". and the other "He will laugh." How true, How true.

I shall call her Taliya when in need of a nickname.

I wouldn't be calling her Ta Ta...that means boobs!!

This Girl loves to Talk said...

I was so gonna write I know Ta Ta means boobs.. and Ya Ya means Grandmother! lol.. but consider Miss A is called Ka Ka (poo in some countries) by miss G... It can't get much worse!!

Congratulations Bobbie she is so precious. Lovely story of the name - hope you record that for her!

Love love love nicknames and all the possible ones here - congrats and so very happy for you guys!!!