It's MY month.. or should that be OUR month 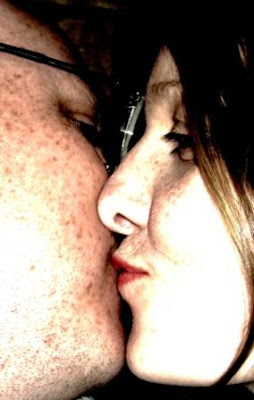 So I was reading The Mr's blog (yes he has one ~ after having to teach a class about it, so he thought he better have one~ you know hypocrisy and all ~ So he started one for 'research purposes') and he was mentioning some favourite things ~ one being that his favourite month is October - Which reminded me that October was OUR MONTH.. the month that started it all.....

Yeah, we have a month, you know like most couples have years.. we had weeks... I don't recomend it for everyone but we were only dating around 3 weeks before we got engaged (we did know of eachother for a year before though-I know, trying to Justify it and all ~ cause if my girls try to pull the same thing I'll probably kill them.. LOL)

It makes it easy to remember that's for sure..

..like how the whole ball started rolling (I was at a friends house and answered their phone. The Mr was talking of a party. I had other plans. Later that evening I cancelled my plans and felt inspired to ring The MR to ask for a lift to the party as it was far away (and during the drive we both had spooky precognition visions of us sitting in the car years down the track, all comfortable like kids in the back like, which of course we didn't tell the other about)

.... like the first unoffical date (I took him soup when he was sick ~ Yeah a can of 'cream of chicken soup' as a joke and we STILL have that can!)

....when we decided we liked each other, (at an 80's party of all things - but we didn't tell eachother we could just tell from the electricty passing through our touch or maybe our HUGE smiles )

.... Or our First real date ~ Picking me up from work at Subway and going out for icecream even though I smelt like YEAST (yep he's a keeper :)

There was mention of about 4 other guys in my journal around the same time.. As The Mr reminds often...he had to beat off all the competition to even get a date with me (not true) it was all part of the 'master plan' but as they say The Best Man was left standing

A quote from my journal in our early dating (what?? if it was only 3 weeks.. maybe I am talking days here)


"I am getting strange isms about him.. Like Eternal isms"

A month is more fun than a day. More oportunities to surprise each other.