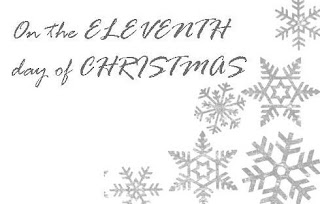 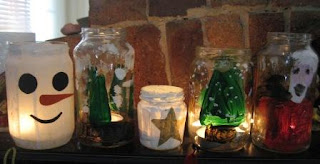 The Mr and I have a new addiction. Chilled bottled Cherries with Vanilla Yoghurt. Its divine! And this equals an overabundance of Jars that I can't bear to throw out!

So I thought it was time to use some up. This idea was sparked by the many Halloween glass jar luminaries I saw around the net.

Basically paint on a jar! The other way is gluing tissue paper on to jars (that was how the snowman and star one were made)

Be careful around small children once lit. The glass became very hot quite quickly. A looking at only - NO TOUCHY!!

We used ours as a table centre piece outside when we had friends over for dinner this week. 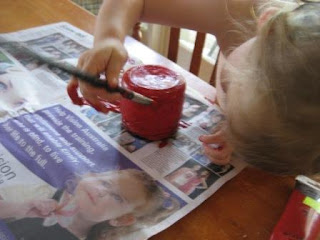 and I had to include this! Miss G about bent herself in circles to paint around the jar, it was funny. She was almost flat on the table at one stage. It was a good exercise in painting something that isnt flat on the table.
Posted by This Girl loves to Talk at 5:33 PM

My sister in law made these, and she used little battery lit candles. If you can find them, they are much safer for little kids, and not a fire hazard like the real candles are.

I love this idea. Will have to search for the battery operated candles, with my kids being piromaniacs and all. I wonder if they make cool shadows.