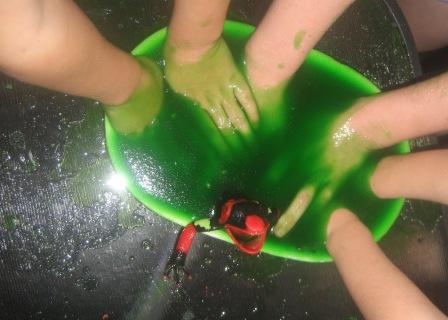 My kids came up with the recipe for this. I found them in the kitchen with a bowl full of water and green food colouring. They poured in some vinegar and then were sprinkling in bi carb for the 'volcano' bubbly effect.

When they grew bored of that they said they wanted to make their water 'thicker' and went off looking for cornflour, only to find none. They then decided on flour, but I was able to talk them out of it.

I found an old small container of gelatine  - some leftover thing from some recipe years ago no doubt.

We spinkled in half the jar and watched and played as the green goo became thicker by the minute.

After a while they had the perfect goop.

It started as a swamp for toys. Then their hands ended up in it, then it started dripping - so I ordered them OUTSIDE goo, animals and all to play in the grass. They came back covered in green, I had a jiggily leftovers all over the bath (and they managed to drop the ceramic dish and smash it) but other than that this was a great sensory, fun activity. Instigated by them.
Posted by This Girl loves to Talk at 1:59 PM

Thank you Bobbie for visiting and giving me the link to your other blog. I'm enjoying it and taking notes. I love that it has other FHE linkys as well and songs and crafts. It's a great blog. I'm going to head over and read some more.

What is the weather like for Spring in Australia? I know we're always opposite.