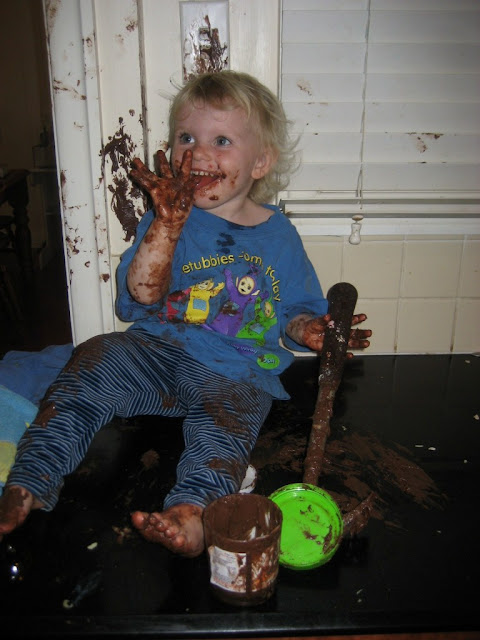 Maybe we do have  chocolate issues at our house :) An old one of Miss G.

For the Month of June I am participating in a chocolate ban.

Sadly most of the worlds cocoa beans are bought from a country that uses Child Labour in the picking/growing of cocoa beans.  Much of it is also forced slave labour. This problem was actually bought to my attention years ago, yet I did nothing. I still ate chocolate. Well some friends and family have started a boycott and it got me thinking more deeply.

Go to these websites for information on Child Slavery and Chocolate.


So I have now gone a week with no chocolate. I have been very amused at how much chocolate permeates our lives (and chocolate ISNT EVEN MY FAVOURITE FLAVOUR!) From my morning cup of Hot milo. To my dessert of one Tim Tam with a milo (if its cold). To the small treat in the girls lunch boxes. To the Nutella on fresh bread. To the prize I won at a party of friday night (I'm still staring at that box of Roses Chocolates in my handbag) To the choc chips begging me to make Magic Slice. To the iced chocolate drink I like at the cafe.


And even funnily enough after explaining to a friend why I wasn't eating chocolate, I almost slipped! Half hour later we were in the car when her sister handed over the car seat a little bag of M&M's and asked if I wanted one. I put my hand in to grab one when my other friend who knew I wasn't eating chocoalte yelled out "NO! Your not eating chocolate REMEMBER??" It was such an instinctive reaction to accept something someone is giving me. I was appalled at myself!!


I have also spent more money on treats to replace our cheap treats of chocolate (now we know why chocolate it so cheap. People who pick the beans are NOT PAID!) One of the few reasons I buy chocolate is that it is cheaper than me baking. Baking is too expensive these day. Ingredients cost too much. Also if I bake I eat a lot of it.

I almost gave up today to have some Ice magic on my icecream. I figured  no one will know. I started to doubt our efforts. Who is going to care if a few of us go without chocolate for a month. It won't change the industry.


All these little lies told to myself. All these justifications.

Then I was thinking how all my chocolate issues are like sin.

We tell lies to ourselves. How we justify things we do.

If I can do it with chocolate, what's to say about other areas I neglect or cut corners on?

You tube video's on chocolate and Child Slavery.

Chocolonly - Trying to make slave free chocolate
Posted by This Girl loves to Talk at 4:14 PM

I had a similar experience when I first stopped eating chocolate.. i couldn't BELIEVE how much cocoa I consumed without even realizing it.. it's crazy..