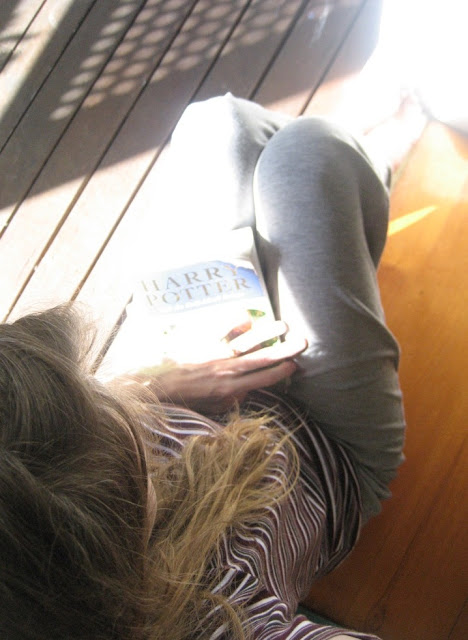 For the past two months I have read every single harry potter book and watched all the movies.

I think The Mr will be glad NOT to see me with a Harry Potter book in my hands.

Ohhh you will be soooo sad

Why is the ending not good?

No - you will just have Harry Potter withdrawls.
I was sad for a month after I finished them all.

No more joking to the Mr that I'm gonna put on my facebook status  "In bed with Harry"  The Mr said thats it's not really appropriate :) It's not my fault he is out most nights!

No more getting the chills in the scary bits. I've had nightmares! lol

No more people dying!
I cried bucketloads when Sirius died. I have only seen two/three of the movies and I had no idea that he died!!! oh the tears!

We are offically finished!

I also didn't really like the last book.
(spoilers ahead, but I'm sure I'm like the last person on the planet to read Harry Potter)

Parts I loved but on the whole - JK Rowling should have :


Should have just stuck with Horcrux's and ditched the deathly hallows

I wanted Snape and Harry to reconcile WHILE snape was alive

Snape probably should have lived. I would have even liked to see Snape in the final battle switch sides over to Harry in front of voldemort and seen his shock before they killed voldemort

I understood why people had to die and that it was necessary that Lupin die (the last of the original order) BUT WHY did JK make them have a BABY only just before.. (sob sob.. a new werewolf harry in the making)

The non human people who died got lots of page time but snape, lupin and tonks got one liners - they're dead. Lupin was close to harry, he deserved to go out atleast defending harry or tonks, or some bravery.

Hedwig! Dobby! Dumbledore! Colin Creevey!! Snape! Lupin! Tonks! Fred!
(ok I'm not that bothered - it is war afterall - but why not Mandugus, Shaklebolt or other non emotionally invested characters ;)

I was so sure it would be PERCY that would die. Why one of the twins. I love their characters the most!

I read somewhere online - Snape - double agent, genius, potions master, unrequited lover of Lily, and he got killed by a snake!! I think snape should have forseen this and taken some sort of potion that would have protected him from Nagini.

Harry should have killed Bellatrix or possibly even Neville to make up for his parents.

All the talk about never using the unforgiveable curses in the previous 6 books and all of a sudden everyones using them left right and centre.

Even though I believe in life after death I found it hard to believe that Dumbledore was 'waiting' for Harry in his 'limbo' or whatever it was. I honestly thought Dumbledore wasn't really dead. That he would be like his phoenix or something.

The Epilogue was confusing at first, and a bit too cheesy. The deathly hallows could have been ditched and more time spent on what happened after. I mean does harry become Minister for magic like someone predicted (I think trelawney?) does he become an Auror? which is what he wanted or are they not necessary anymore (I'm sure there are still other bad wizards even if voldemort is dead)
I know you could go on and on forever if you continue to tie up all loose ends, but the other characters didnt get that.


Oh I think I need a harry potter book club or something.


Ok whats the next book addiction? I hear Hunger Games are good??
Posted by This Girl loves to Talk at 11:24 AM

You're so funny. I agree with some of your points about the last book, but JK Rowling did say in an interview that people would be mad about some of the characters she killed off, but you have to remember, it's a battle between good and evil, and some people have to die for the good of the human race. I really agree with you on how Harry kills Voldemort. I really thought she should develop Harry more. I thought he was kind of a weak hero, always relying on luck and other peoples knowledge to help him survive. I would have liked to see him get stronger on hid own and defeat Voldemort with his own powers.

I'm reading the Eragon series, and I LOOOOOOVE it. It's as addictive as Harry Potter. Also, the Fablehaven series I loved as well. You could try both of those.

I quickly skipped down to the comments when you were talking about the last book! I don't know what happened in the last two!! Oh no, will have to get them and finish off the series :)

Hunger Games is a great book! My son just started book 5 of Harry Potter. Congratulations reading this series is no easy task especially for a busy mom of 4.

Hi Bobbie,
I loved them too! Its great having kids - an excuse to read the books they're reading! My favourite character was Snape. After you learn about why he was doing what he was doing, I enjoyed re reading the books (or re watching the movies) to see what a different spin it put on his actions! I can't wait for the final movies! I think the movies have been good representations of what happened in the books, unlike the Percy Jackson movie, which was pretty stupid, whereas the books are ok.
good luck with finding another book series to love!
Jenny

What to read next, oh what not to read. Hunger games was good, although you will have to face more fighting. But lots of people that I know have read it and think it may even be better then twilight. Gallagher girls is also a great read, all about a teenage spy. This series is a really simple and fun read. With a little romance thrown in too. If you enjoyed Twilight you might also like Vampire Academy. For teenage book reviews and what's hot at the moment http://weloveya.wordpress.com/ always has updates and commentries, not to mention giveaways too.