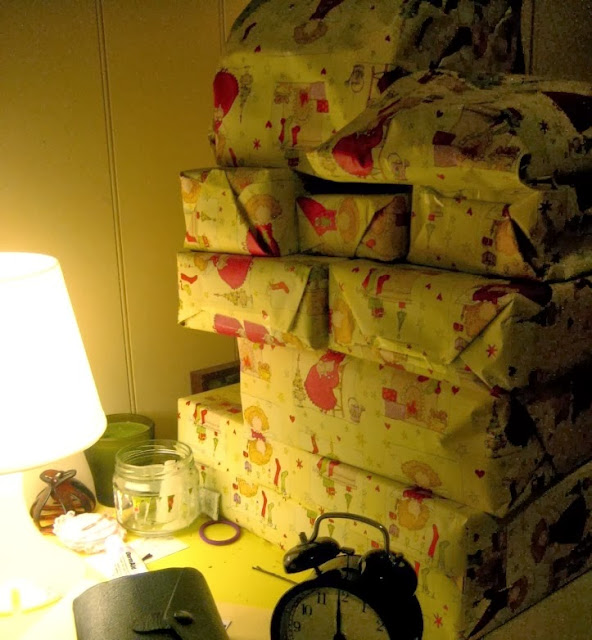 Last night as I was wrapping presents I looked at the stash I've had on layby for the last few months for the first time and thought it was pretty dismal. No big toys or big ticket items (except for zhu zhu pets which they really want)

I started to worry that it wasn't enough and should I hit the shops today and buy more?

This year I didn't get books like usual, I didn't get them new clothes, and I didn't get school supplies {being the sneaky mum that I am I pass off new school bags and lunchboxes as Christmas gifts} I didn't get outdoorsy games things or sports gear and we have yet to move our children into the computer game phase so no Wii's or Video games or the like.

oh the list goes on and on of what I didn't get.

Then I told myself  they have enough.

They will get a bunch of gifts from grandparents and great grandparents. They have enough!

Christmas is about the WHOLE month of December. If you were to ask the girls they would tell you this is a common phrase said in this house. I tell my kids all the time. This is why traditions are important to me.


I remember a year when I was around 12 (or 14 can't remember) where I cried in my room because I wasn't happy enough with my gifts and felt that Christmas was very anti climatic. " I've waited all year for this?"  I never want my kids to feel that way which is why I do so many things the month of December and declaring the whole month Christmas and spend the time building up traditions rather than just the eager waiting for "THE DAY OF ALL DAYS"


Oddly enough I also remember berating myself that day thinking stop crying, its so embarrassing. You are being ungrateful. You're grown now so you can't expect Christmas to still have that magic. I felt guilty for thinking badly of my parents. I felt bad for being ungrateful. I even thought of children around the world who had nothing!


I've often found Christmas day to be a let down, anticlimatic ending for the season and I have been working on reversing that feeling. Instead, to see it as a day to relax, enjoy being with family and allow the season to wind down (or for the summer season to start up).

Time just to be.


I really hope to impart that to the girls. And that yes they do have enough.


Strangely it was Santa who reassured me.

When asked what they wanted for Christmas the girls couldn't think of anything.  Even after he extensively probed for a while they were able to come up with very simple things (this has happened twice now)

He ended by saying 'Well then, I will bring you a surprise.'

Then he said to me what wonderful girls they were and how he has met many a demanding one.


And my heart soared when I realised I am doing the right thing.


May your season be full. And may your gifts be enough.


It will be enough.

Oh I love this! I remember that feeling as well as a child. I'm hoping to instil the idea of giving in my boys as well as gratitude and connection to family. Appreciating all that we already have as well as what we'll receive!