I have been spoilt for too long

I have never lived in a house with a dishwasher or an ensuite bathroom... My current house has both. You don't know what you are missing, when you have never had something.... but when you do and then it is gone..... BOO HOOO!!

About 3 weeks ago, rushing around, trying to get out the door to get to school, at 8:30am the electricity turned off. The washing machine, TV, computer, and dishwasher all off.... a very quiet house..... NOT NORMAL!!.....

So I go to the fuse box, flick the right switch and everything is back on (It took me a few minutes to work out what to do, where the box is and looking at all the switches to see which one was the right switch - I was pretty proud of this effort - and I only did it alone as my phone for some bizarre reason couldn't call mobile phones so Ken couldn't rescue me! )

Back inside I notice a distinct burnt plastic smell ... not good.... it was coming from the dishwasher. I was too scared to leave the house incase an electrical fire burnt it down... so after turning off the switch ( It was truly dead, couldn't even turn the dishwasher back on... no lights.. nothing) and checking the house, we headed off to school. This was after I put the family photo albums and journals in a box in the garage - it is seperate from the house - so if the house did burn, my memories wouldn't burn with it!! Paranoid - maybe?

Well today 3 weeks later the man came to fix it - I felt sorry for him, cause it smelt soooo bad... it was full when it stopped. I took all the dishes out ( which had already been in over a day - milk is not good in this warm weather a day later ... ewww) and washed them... and then poured some hot water down the dishwasher hoping that would clean it out enough... but it wasn't enough.... 3 weeks later so smelly.

well he looked and then dropped the bad news... he had to take it away, and will see what is wrong - (probably from cockroaches he said the most common problem.. ewwww! they eat the computer chips) then bill the real estate, which will ask the owner what they want to do.... so it could be gone a very long time... boo hooo hoooo :(

So now everytime I look in the kitchen I feel a little sad... I have a gaping hole where my dishwasher used to be (and it was a really nice one with matching front - you couldn't even tell it was a dishwasher there)

I miss you dishwasher! 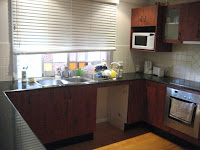 Posted by This Girl loves to Talk at 4:12 PM

That stinks - it's never fun to take a step down the "spoiled" ladder - though now that was have a dishwasher it feels more like a necessity than a luxury. Hope it comes back!!