The Chicks are now relaxing in the Peaceful pastures of Grandma's - But Earlier.... 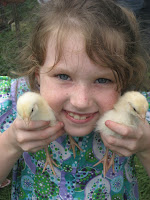 Kalani was so in love with the little chickens at her grandparents house, she begged and pleaded to Grandma and Grandad if she could take the chickens for show and tell. Now these chickens were reared at a Day Care Centre in a chicken hatching program. After a few weeks they need to be retired to somewhere peaceful. My brother (who works at the daycare) offered my parents house as they already have some chickens.
So therefore the poor things were probably still tramatised from hatching out with a bunch of kids looking at them. They had one week on peace and then we shipped them off to the girls school. Now that I have 2 children at school - we of course had to show and tell at each class - that means 50 children. So with grandma and myself we braved the crowds of very excited children.
Constantly telling children to sit down and move back drives you crazy - I now know that I don't want to be a prep or lower grades teacher - oh my - the headache from spending 2 hours defending poor little chickens! Each child got to hold a chicken for a few minutes then it was someone elses turn. The chickens even pooped on people (lucky mum bought towels for the kids legs) so of course the children laughed so loud and went on and on for like 20 mins "the chicken pooed, the chicken pooped ....etc etc"
Some children were scared of the chicks, so it was hilarious to watch kids petrified of them. I held the chicken for them and some bravely snapped a finger out at lightning speed to give a less than 1 second touch. This reminded me that even though we have no pets ( I hate animals :) - well I don't like them living with me, or looking after them ) my kids still have opportunities that most don't, which is nice - they aren't scared of anything unfortunately :(
Well the chicks survived, I don't think they will require too much therapy.... 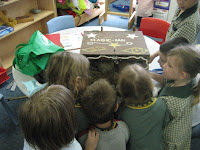 Posted by This Girl loves to Talk at 7:44 AM

Cute!!! I could never be a teacher of those ages either. Wait - maybe of any ages. I am so glad for good teachers!!