Traumatised - I caught a bus with 3 kids!! 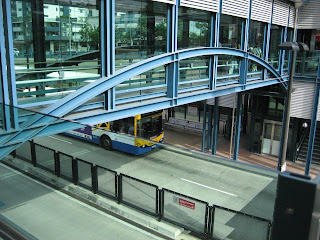 OK - I dont like catching buses - and it has been many years since I have - give me the trains or the city cat - thats cool - but I know from previous experience how horrifying it can be to catch a bus with small children - the last time I did I only had 2 kids and a mum to help me!!

I have sucessfully dodged having to catch a bus with kids in tow for 3-4 years, that record was broken yesterday. We were invited to a birthday party at McDonalds. The only one that does mid week parties was the Coorparoo one. Ken was working - the only way for us to get there :
CATCH A BUS!!
Well as I expected - it was a nightmare.
We walked to the woolloongabba bus station and the bus was there - the kids wanted to run on but I said no as we had so much stuff and no money out yet. So we put the school bags on their backs, got out the money and another 204 bus comes along, so we attempt to jump on. I send the girls on to sit on a seat while I pay, fold up the pram and sit down - Gabrielle gets scared, cries breaks away from her sisters, so I am now trying to work out where we are going, how much it will be, the ages of my kids - which ones I have to pay for and I have Gabrielle under my feet crying, I attempt to fold the pram but with all our junk in it - it is not complying - i throw my purse and change onto a nearby chair - pull Gabrielle by one arm and put her up there, contend with the crazy not folding pram and deal with the sway of the bus as it takes off almost sending Gabrielle flying along with all my coins down the isle.
*Breathe* ok so finally we are sitting but as it is only a few minutes to Coorparoo we were soon doing the same thing to get out of the bus! I quickly took all the kids out of the bus, put them as far from the road as I could - told the girls to hold Gabrielle back even if she cries and then I ran back in the pull the pram out of the cage it was in - the bus driver got up to help - I think he realised it would be quicker if he did it - he learnt from when we tried to board the bus!!
In the few non crazy minutes I did manage to snap a few photos - of course all this stress was completely delegated to only their mum - the kids had a great time. They want to do it again! 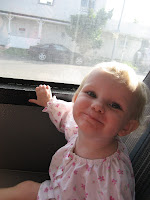 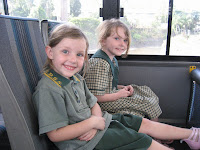 I think the saddest thing really was that noone helped me. I know if I saw someone in a similar situation I would have helped, grabbed the baby, or the pram etc.It makes you sad that really you went thru that alone and the few people on the bus, didn't really care - I am sure if a young mother was on there she would have helped - they were mainly all students. The driver was nice, but they can't get out of the seat really, he did hand back 50 cents that went rolling down the isle.
Lucky Ken came and picked us up and we didn't have to ride the bus home in the dark! I don't think I would have survived - HA!
Posted by This Girl loves to Talk at 7:34 AM

I get homesick when I read your blog sometimes (familiar sites and all)!!! Sorry you had to go through that - I think I would have said "sorry, no party for us if we have to take the bus" - you are a better mom than I am!!

Congratulations bobbie!,
you are very brave. I have lived in Brisbane for 9 or so years now, and have never caught a bus here! they are scary! what if it doesn't go where its supposed to and I get lost? or (more likely) I miss my stop and end up who knows where! at least the train and city cat are limited to the rails and river!
jenny strodl

This Girl loves to Talk said...

oh yes... it really was scarey... ha hahah a ha... I had a bad experience with a grumpy driver a few years ago... it really is that you have to get the kid out of the pram and hold the kid(s), the pram, your bag, shopping (or whatever you have) and during all this noone in the bus (there were only a few i suppose) NO one got up to help me even though i had a crying kid, bag,pram, money falling on the ground etc..

I soooo would help someone in a similar situation, I will say though the bus driver was nice, and I know they cant get out of the drivers seat i think it is against the rules or something - someone could steal the bus.. ha ha ha