First day of the holidays we made about 5 kg of playdough.. I was inspired by my new favourite mum/kid craft blog Filth Wizardry (I totally recommend you take half an hour and scroll through all her archives.. I did and have enough ideas to keep the kids busy all holidays :) 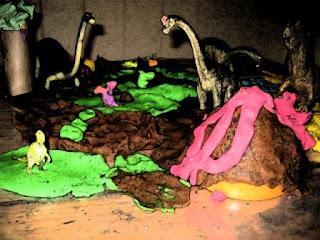 The much better one we copied from

So far we have made a Train World, Cupcake Cafe, Dino World.. am working on a castle them for later. 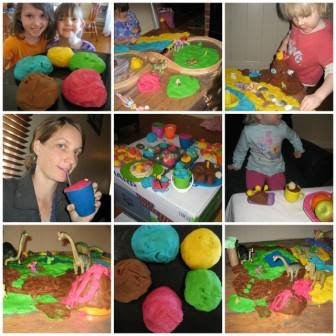 It wasn't as hard as I thought it would be. Bought 1 bag of flour, 1 bag salt and 2 containers of cream of tartar. I made three lots on the stove, the older girls mixed their's in a bowl with boiled water from a jug - the no cook recipe - The kitchen was covered in a lot of flour though!!

The best idea is to get them to create a world (grass, water, dirt etc) and add toys.... remind them not to mix the colours.. has worked so far :)

It has been ages since we have made playdough (big amounts of it - we have those tiny Playdoh shop bought ones) because our last house had cream carpet the whole way through.. even under the dining table.... is there some secret factory out there churning out cheap cream carpet making investors think it is a good idea for their rental?? So I stopped that sort of thing.. but we have been in our current house for years and there isnt ANY carpet in the whole house... so what was I waiting for??!!
Posted by This Girl loves to Talk at 3:35 PM

I'm so proud of you. I saw the same thing and so far haven't been brave enough to try it. I love her blog too.

looks like the kids had a lot of fun!

As far as the oragami boxes, my daughter is 8, too. At first, hers weren't turning out by I slowed down and showed her how she had to be more exact and fold things and crease it hard. Anyway, after a few tries (some were trashed!), she was doing it on her own. I was proud of her as we've tried oragami before and it didn't turn out.

And, after I posted, I realized we should have used that for "container." :-) But, I just found another NEAT idea at Filthy Wizadry that I hope we can do tomorrow. :-)