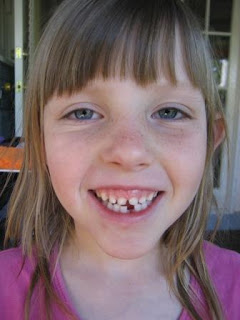 "My tooth, my tooth" Miss A comes racing into the room screaming.. I see blood and say "Awww what have you done?"

and the look of JOY on her face can't even be described. She was positively radiating!

I owe thanks to the friend who made the caramel corn that started the tooth tremble - must have been some tough popcorn ball!!

As with Santa and the Easter Bunny there is no Tooth Fairy at our house :( I know. I know.. bad parent!!

As usual I blame it on the older daughter, just not being party to all this 'fantasy' stuff, and my obviously lack of acting skills to trick her... But what of the younger children?

The thing we have all been waiting for has finally happened! Miss A has lost her first tooth!! Oh the torture of being the 'ONLY' child in her class to have not yet lost a tooth.

(My mother likes to remind me of all the times I came home from school crying that I hadn't lost a tooth yet either - So unlike her sister (who lost a whole bunch of teeth in Preschool)it seems that Miss A was taking after me - A late tooth loser - heck I still have a baby tooth in my mouth!!)

So whilst Miss K was more than happy to keep her teeth in a box ~ and that was that ~ Miss A who knows there is no such thing as the tooth fairy has been asking about it ~ She isnt doing it for the money - she doesn't even seem interested in that part, she just wanted to put her tooth under a pillow and see what happens.

I'm kinda confused really, I mean I don't know what she wants... She knows the tooth fairy is the parent, and she wants to keep the tooth... so I don't see the reasoning behind finding out what will happen.
So this led me to start looking up some 'TOOTH' Traditions.
It might be too late for her first tooth (it was a few weeks ago and she seems to have moved on from the excitement of it all) but maybe subsequent teeth.. and there are also two other little girls in the house yet to lose any teeth - well Miss N needs to grow some first!!
So WHY the tooth fairy at all?
I did some trusty internet searching for you all and came up with:

The origin of this benevolent fairy who swipes the teeth from under pillows and leaves coins (or cash, these days) isn’t clearly defined, although it could be linked to a 18th century French fairy tale. The story, where a mouse changes into a fairy to help a queen defeat an evil king by hiding under his pillow and knocking out his teeth, is a bit more disturbing than our current narrative. The Tooth Fairy as we know it started making appearances in American plays, books, and cartoons in the early part of the 20th century

Many European Countries actually have a tooth mouse instead with varying 'nicer' stories about mice that buy teeth with coins.

In Japan, to ensure that new teeth with grow straight, one should throw lost lower teeth into the air and upper teeth to be thrown down to the ground

In some Asian countries, such as India, Korea and Vietnam, when a child loses a tooth the usual custom is that he or she should throw it onto the roof if it came from the lower jaw, or into the space beneath the floor if it came from the upper jaw. While doing this, the child shouts a request for the tooth to be replaced with the tooth of a mouse. This tradition is based on the fact that the teeth of mice go on growing for their whole life, a characteristic of all rodents

We actually had a Korean girl live with us for a year a few years ago when Miss K lost a tooth and she said to throw it on the roof and its good luck to think a bird will pick it up!

Anyone have any interesting 'tooth' traditions? That could be implemented. Honestly I am pretty bad at this, because of the unpredicatbility of it I suppose. Christmas, easter, birthdays can be planned for and things put away for - but a tooth can be lost at anytime
I found these ideas on a parenting website ~ maybe you might find them useful.
We write a note to the tooth fairy to tell about how it happened. In the note, she also always asks the tooth fairy to put their name on the note. She leaves a line for the fairy to write on and then she signs it. We have had fun coming up with tooth fairy names, like Esmerelda, Fantasia, Annamaria, and Bob. (Yes, there are boy tooth fairies too. My hubby told them a wild story about all the boy tooth fairies that don't usually do the night jobs, but that Bob really liked it and is good at it.) :-) Bob is now the most sought after fairy in our house. :-)

We told them the fairy recycles them into fairy dust. That is why her teeth have to be clean and healthy.. The fairy dust doesn't work with yucky teeth
***

We started a tradition where the children will dictate a letter to me to be written in teeny tiny letters for the teeny tiny fairy to read. We slip this in to a pocket that's attached to the stuffed tooth that has a smiling face on it.
***

We can always tell where our tooth fairy came in through the window and where she flew because there is always pixie dust all over the window sill, bed and money!
***
The tooth fairy would leave him a sparkly tooth brush with his name on it or fun flavored kid toothpaste or minty dental floss or sugar free gum

I think I am liking the last suggestion the best. Maybe I could make up some cute "teeth packs" with with mini toothbrush, kids toothpaste, floss, mouthwash - and stash them away to be used when the time arrives. Maybe the tooth can still be put someone special and the 'tooth pack' arrives during the night???

And maybe sprinkle around some really fine shimmer dust around it...

we all need a little pixie dust right?? 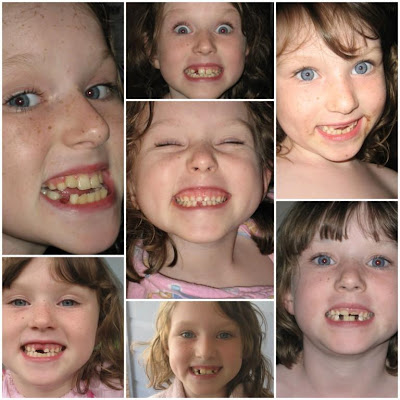 Posted by This Girl loves to Talk at 9:19 PM