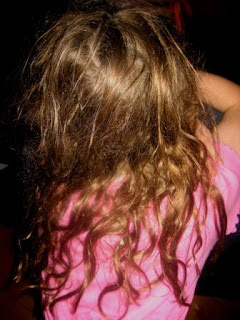 Name witheld to protect the guilty

Doing Hair rules my life, or (the not doing of it) rules it, but I seemed to be bugged by it.

A mother of 3 sons was holding my baby a few months ago. She was just in love. She really wanted a daughter. I told her - "It's not what its cracked up to be."


Having daughters is like having sons except mine have lots of hair and like to wear weird dresses. My girls weren't very girly when they were little - so I said really there isn't much difference.


I said thank your lucky stars you don't have to do hair! (I have several friends who have just sons and I envy their buzz cuts.. ahhh so easy... I can dream can't I??? )


And that unfortunately is where the problem lays


I want to do hair. I even like to do hair. I can braid, plait, bun, french roll, piggy tail, curl, straighten with the best of them. But that wouldn't be fun now would it?

I didn't know tackling, hog tieing, chasing, attempting styles mid sprint was part of it. Oh how little did I know. No - 'cause atleast two of my girls have Hobo Hair - a third doesn't but has sensitive skin so can't stand to have it done or have bands in it - and well the fourth doesn't have enough hair yet....


Speaking of Hobo Hair that term was stolen from this CJane post. Her kid ain't got nothin on mine. Well it seems to be heditary. I blame my mother. Who knows she might blame her mother or great grandmother or something... Basically it is just what I call misbehaving hair. You put it up, but mins later little whisps start falling out. It takes alot of hairspray to make our hair stay put. And sometimes spray doesn't even work, I know I have tried it. Its not straight, and its not curly, it just has a mind of its own. Living in it's own galaxy.

and then they can do my hair.
Posted by This Girl loves to Talk at 9:53 PM

I love doing hair. I am envious of pretty much everyone elses hair. Mine is so fine that nothing stays in. hair bands/clips. Even hair spray made very little difference. But the plus is the knots just fall out. But when Miss stayed at our house i did do her hair but it lasted all of two minutes before she pulled it out and glared at me. I know what you mean. It is not for the want of trying.

Bobbie! WOW! I came across your blog through another blog I read and thought I'd say HI! Your family is beautiful! I laughed when I read this post....with an almost 2 year old girl I hear what you're saying about doing hair :) I couldn't WAIT until my daughters hair was long enough to do and I used to spend a crazy amount of time putting it up BUT now i'm lucky if i can get her to leave it in for more than 2 minutes!! Anyway Your blog looks fantastic! Hope you don't mind if I stop back and read some of your musings :)

I have one of each - boy with the buzz cut and girl with the long hair. She hates me doing her hair but loves to look pretty so I am allowed to do anything. I am making the most of it though...I am sure in the next few years it will all change :(