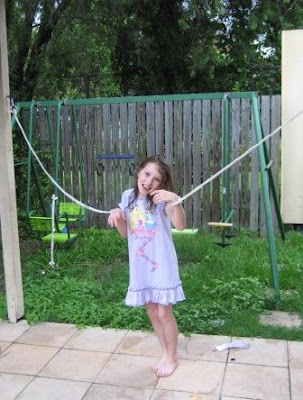 Apparently she is a dinosaur being restrained 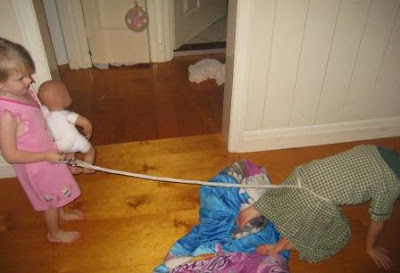 We spent $10 on a set of hammock ropes. Basically 2 nylon ropes, with a hook on one end and a loop on one end.They were used for their correct purposes for a couple of weeks. Since then they have been :


You name it, they've probably used these ropes for it.

The less a toy does. The more the child learns.
Posted by This Girl loves to Talk at 4:29 PM

We had a hammock in our garage, unopened for about ten years. We recently put it out under the trees in our backyard and everyone (even visitors) make a beeline for the hammock... well it go so much use and was a little old, it did not last the distance... best thing ever!! I am going to put one on my wish list for my birthday. Bliss!! Love the kids playing horsey!