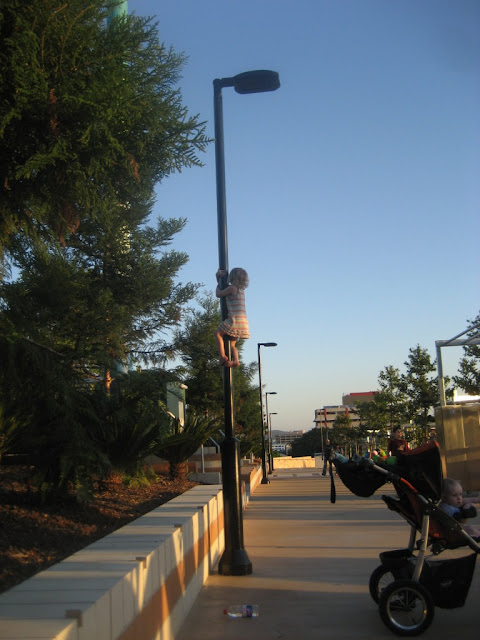 It all started off with this post I read at Crazyland .  She traveled to England alone and was left alone with younger siblings as a teen her first time to London. It reminded me of a blog that I read ages ago about a woman who let her 9 year old son ride the subway home alone from shopping in New York, on purpose. So I googled it to find it again here at Free Range Kids ( I have spent hours reading back posts. Very interesting read. Love her stuff.)

Apparently statistically children are safer today than children were in the 70's and 80's. So if you grew up playing in the street then - chances are your children will be even safer. The problem with today is terrible crimes are in the media more and played around the world. Children are  more likely to be abused by family and friends than a stranger. Even as parents chances of them being mistreated by yourself is much higher than anything else.

Now I can't say I am really a Free Range Parent   Maybe an Egg? Trying to hatch?

I try to employ non Helicopter Parenting, but am still taking babysteps. Before I had kids I thought yeah, I'll be cool and all.. then you have kids and your fears come in to play.

I try not to watch the kids in the back yard.
I let them play in the empty lot next door and lane occassionally ( I sneak looks so they dont know I am watching)
I have let Miss A (7) walk our neighbour two blocks to the neighbours ride to school, alone. ( I drive along later and pick up MissA)
The kids wander alone before and after church (not really alone as there is a bazillion people in the halls)
The Mr let the kids go to the fish and chip shop alone once - but I caved and made him go up after them after 5 mins!(In my defense its on a busy major road and weird people hang around up there - but the kids were MAD when he came to get them - I think it put back their trust in us that we trust them. Sad.)

So I can count these times on one hand!! Pretty sad really.

Just the other day, my neighbour took Miss A to walk up a waterfall at Mt Cootha. Yes - they walk up the river then up the rocks to the top of the falls. ( A little dangerous but it isnt too high) At the top my neighbour rested. The girls wanted to go 'further' along the river. She let them!!! Alone. As she was telling me this I got a bit anxious, like I didn't like it. But then I thought to myself - its good for the kids to explore alone... think positive!! . She said they came back and told her that they both did a wee in the bush as they needed to go to the toilet!! LOL LOL

The Mr likes to wax lyrical about when he was 10 he delivered newspapers. Alone. In the morning dark, In the middle of Melbourne Winters, with 4 layers of clothes and gloves on. Miss K is 9  - would I let her do the same thing next year?? NO WAY! and that is really a shame. Another shame is now apparently many of these types of things are no longer allowed to be done by people under 18 because of liability. Sad.


Now I don't want anything bad to happen to my children. No parent does. But things happen anyway. I used to discuss with The MR what would we do if an accident happend to our children in the care of someone else, or in the others care. We said we would not blame eachother or another.(well atleast try not to) I hope that may be the case if anything terrible ever befalls our kids.  In the old days people had 9 kids cause they knew 3 or more might die. There are so many bad things out in the world. I try to tell myself this. Reality is, something bad could happen to one of my kids. My own father died in  a car accident. Hit by a drunk driver. My mother was in worse condition (and pregnant with me) yet he was the one that died.
A few high profile recent kidnapping cases the parents were nearby. The kidnapping of Jaycee Duggard the one captive for 18 years her Dad saw it happen,  the girl in Salt Lake City, her parents were in the house. So perhaps these are freak of nature things that perhaps you can't really prevent.


So I wrote this post a week ago and never posted it.

I have implemented some more free range for the kids and it is going wonderful. It happend to co incide with our NO TV week, so that was perfect.  The older 3 girls have had to play outside each afternoon. I have let them go to the empty lot and in the lane without sneeking peeks at them, expecting them to look out for one another (they are so close that I can hear them though)

The older two have been to the park with a half hour limit and have done great! They came skipping home yelling out " WERE HOME" and were absolutely grinning in pleasure.

More playing on the path out the front of our house, riding up and down the street. Best to let everyone know who lives here! and maybe we can meet some other kids that way.

In today's world it is so hard to do this.

I know cause I spent the half hour my older girls went to the park biting my nails!
Posted by This Girl loves to Talk at 1:55 PM

I'm not sure if I agree with the free range parenting ideal but understand where your coming from.

For me I need to feel like if the worst does happen I'll need to be able to live with myself knowing that I had done all I could to keep our children safe.

Supervision is not always a bad thing as most crimes are opportunistic. If something is making your nervous it could be the whisperings of the spirit.

Love ya B and appreciate your sharing.

In theory I think free range parenting is fantastic. The problem is me letting go not the boys (5, and 3years).

I love the photo of Miss G. I automatically think "Don't you make me come up there and get you!!! Lol!

AAAAAAHHHHHHHHHH! Bring in the helicopter. Please let me send her off to Gymnastics for you! She's a serious contender for the 2018 Olympics!

I'm not much of a hover-er. Spencer chops vegetables with me quite regularly and probably cuts himself 70% of the time, i find him over at the neighbors after 10mins of realizing i haven't heard him in a while and casually wander over another 10mins later...

firstly - did your daughter really climb that high by herself?? If she did - she is awesome and my 5 year old son would love some tips :)

Secondly - Chad and I are SO fiercely protective of our kids. maybe sometimes to much?? We do however give them LOTS of opportunity and allow them to be 'free' but pretty much always in an area where we are. Sometimes I feel bad cause we see all the neighborhood kids out playing in the street together (often getting into mischief I might add :) but unless either myself or Chad are out there too - we don't let them go out.....I guess our reasoning is the same as what Holly said in her second paragraph.

Hi Bobbie,
love this post, and can see the benefit of letting my children run free, just can't convince myself do it yet!! Was having a chat with Rachael today and she quoted your statistic of having 9 children in case 3 died, but couldn't remember where she had read it. We laughed when we realised that you were our common source of information!
Jenny