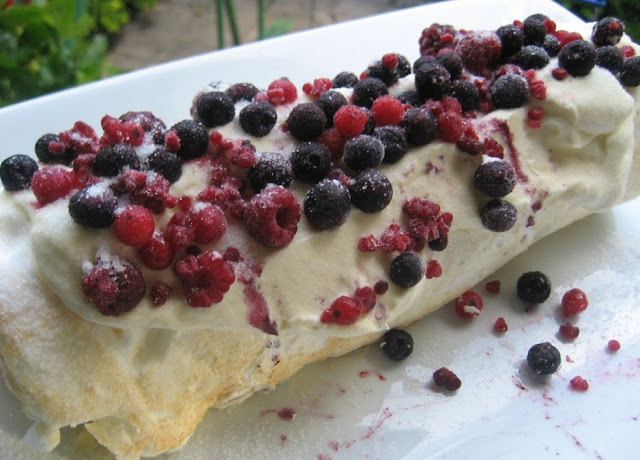 I've been looking around for desserts I might want to have at our Annual Grandparents Christmas Party.

A friend makes this pavlova roll and I really like it, so I've made it twice in the last few weeks.


I used This Recipe from Best Recipes. I followed it exactly the first time.

Except my roll was eggy and soft and blergg... I really dont like egg smell so I  wanted to be sick.

Soooo second time I baked it like you would a pavlova. Low Heat Slow Oven. And it was DELISH!

So I cooked it for around 30 mins this time on low heat. It was much crunchier and I thought it wouldn't roll.

I also didnt refridgerate for 24 hours either time. A couple of hours is plenty.


It is so easy to make and fairly cheap as it can feed about 8 people.

Basically Beat 4 egg whites until foamy. Add a cup of sugar slowly and beat until stiff.
Line a big flat cooking tray with baking paper. Spread out mix thin over the tray (rectangle or square shape)
Bake in a low oven (100 degrees celcius) for half hour or so till crunchy.
When cool cover in whipped cream and diced strawberries.
Slowly roll over using the paper if rectangle roll long sides to eachother
Cover in cling wrap to keep shape and refridgerate
Decorate before serving with more cream and berries.
Posted by This Girl loves to Talk at 1:27 PM

It looks very pretty with the glittery looking sugar!