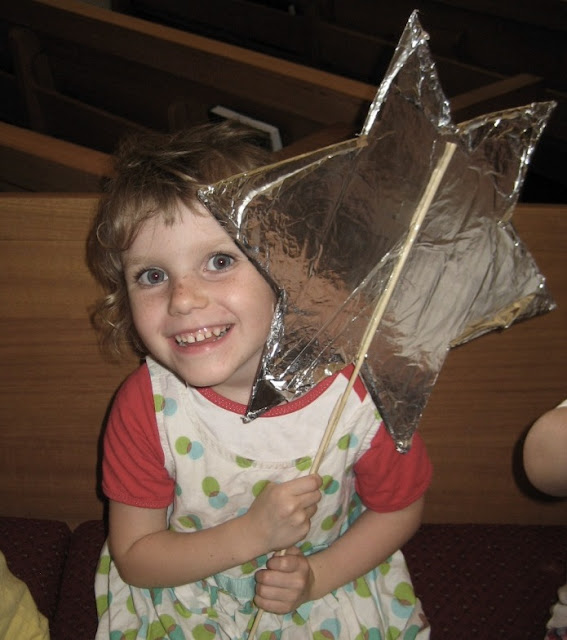 waiting to be the star in the nativity play

It's funny how things happen.

Miss G is a Santa Believer.

Very hard to do in this house! Yet she has managed it!


Now we watch santa movies and read santa books ~ I'm not that much of a hater.

I just don't lie to my kids.

So even though we've (well her sisters mainly) have told G that Santa isn't real, she still believes he is.

This has just started in the last few months. She didn't believe last year as far as I was aware.

It was bought to my attention when we were reading a Nativity story.

"This story isn't about Christmas! Where's Santa?
Christmas is about Santa who brings your presents down the chimney"


The funny thing is she knows the real story. She plays with her nativity set everyday since we've put it up. She was the star in Christmas play. She can recite the nativity story in Family Home Evening.

I think these two Christmas stories are exisiting in two different realities in her head.


I blame Dora personally. Back 3 months ago she rented a Christmas Dora DVD.

I'll support her in what may possibly be a very short lived phase.

I even went to take her to see Santa but she refused to get closer than the second story balcony.


She doesn't love him THAT MUCH!
Posted by This Girl loves to Talk at 12:12 PM

Oh no Bobbie!
I think my Pia is pretty wrapped in Santa too, despite no positive reinforcement from me! I think she has picked it up from kindy! Although I try to avoid him at home, I do point him out in the shopping centre (there is a man dressed up as Santa, rather than there is Santa!) At least N is not asking for a t-shirt saying "I'm in it for the presents" or "gimme gimme gimme"!
I don't understand who would buy that for their child and think it was funny!
My kids also know that the tooth fairy is me, and the easter bunny, although I think again Pia hasn't figured that one out.
Best of luck! congratulations for not lying to your children, but still giving them plenty of Christmas magic!
Jenny