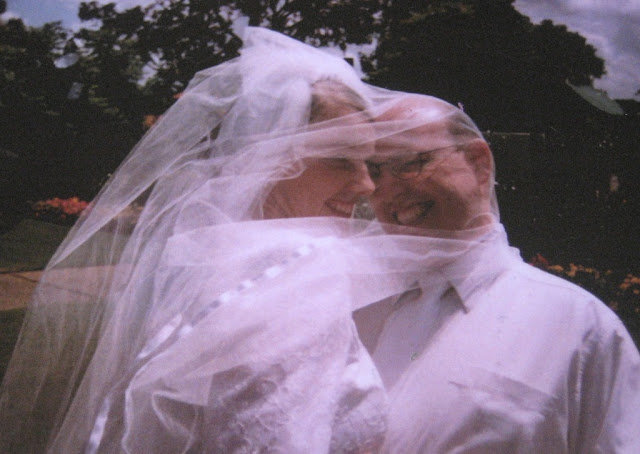 The girls found this photo of us and placed it in our ensuite.  I smile everytime I look at it.

Our Wedding Anniversary is this week. (so expect a lot of gag inducing posts)

Can I hope for some silk, linen or pearl ? ( The Traditional and Modern gifts for your 12th anniversary)
Though if we did that sort of thing (which we don't really) what the heck would I buy him??

I was telling a group "Why do people say the first year of marriage is hard? I loved it. Was Easy. Breezy."

Until the Mr pipes up with

To be fair he only said that once. Several years after we were married .. and I think he was joking... I think....


I was talking to a friend last week who also  married young to a man older than her. I said our poor husbands. What were they thinking? Taking immature delicate things like us and making us wives! Crazy. Did they really know what they were getting into?

(maybe its a reflection on their mental status ;)

But now 12 years later I'm still an immature delicate thing so maybe he was right in his thinking.


He must have loved me.


And I think he has come to love me more as time goes by.