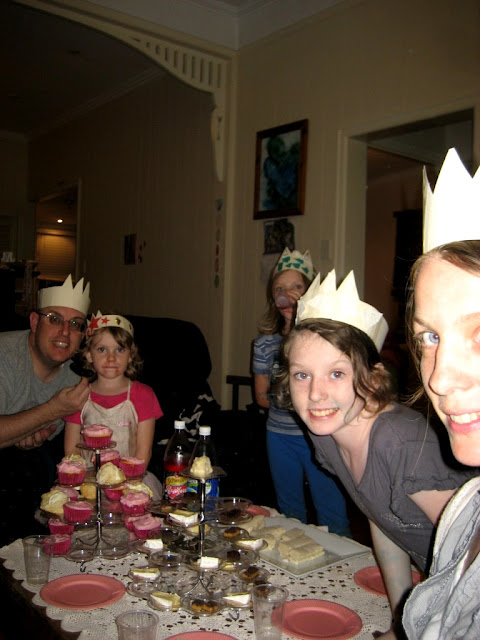 While watching the royal wedding shenanigans we shall be dining on

The girls have been making crowns. (Even though one or more of them have no interest in the wedding (the eldest) or even know who wills and kate are (the youngest ones) There is such a buzz going on here. I'm glad I threw this all together in a couple of hours (read exhaustion from camping, a last minute school athletics carnival to decorate bodies for that we thought had been on while we were camping and grocery shopping all came first). I wasn't even gonna watch the wedding to tell the truth. I don't really care all that much. But hey it only happens once every 30 years or so.

One  early marriage memories I have of The Mr is him gingerly bringing a pillowcase out of hiding from a cupboard. Precious Contents inside. I wondered what it could be. Royal Memorabilla. Women's Weekly Royal Editions. Old.

My husband is a closet royalist?

(He swears he didn't purchase them ;) They were gifted him from his Grandmother.

Whilst he doesnt care for royal gossip and the like and doesn't follow closely, royal lines, historical and military sides of it does interest him. He has taught me over the years to have a greater respect for ceremony and honoring those types of things. I have a very interesting husband that is for sure.

This Reminds me of our visit to the Ekka last year. We were there for the opening ceremony (second night) and had to sit through army salutes/march and a speech by our states Governor General. Someone who was with us (who shall not be named ;) did not want to stand in  respect to the Govenor as they said 'she isnt from here and has lived all over the world and has just turned up to be the Governor and is not a nice person etc and doesn't deserve our respects. The Mr said its important for the children to respect and to understand who these people are that serve us. We are a part of this ceremony and we are lucky to be so.


I personally am more interested in the 'behind the scenes' like that show  'A Year with the Royals.' Where we get to see the royal fireplace taker carer and the royal clock guy who job it is just to look after the thousands of clocks the palace has. I was never really interested in the royals till I saw that show. All very facsinating. I also had no interest/like for Prince Charles until I read a National Geographic magazine about all the work he does. That man works hard for serveral places and for his own envirnomental ideas/company. I always thought they sat around spending state money. They really do work incredibly hard.

I also remember watching a show called Australian Princess. It was a reality show that I loved. One day the girls were complaining about why they needed to know all these social rules, how to make tea a special way, rules, rules and more rules. (and I agreed with them - its status snobbery!) but the lady explained how important these things were for society. That they were protected in some way. That they continued on. That they once did have purpose. It was all very genteel but it spoke to me in a way. Yes I might be very removed from that life, but it doesn't mean it is wrong. It is just special and different.

So here we are. Sitting. Waiting. A royal ceremony to be had.

A bit of respect for the royals from us.

The eldest daughter who told me she wasn't interested in watching has watched in rapted attention nearly the whole time giving us running commentary!!

I've been thinking that EVERYONE was wearing modest clothes. How wonderful. If it's good enough for the Royals people, it should be good enough for us too!! Was very refreshing to have a 'big do' not be a flesh fest.
Posted by This Girl loves to Talk at 5:15 PM

I thought about doing a high tea too but after everyone expressed zero interest I decided not too (I really should not eat all that food by myself :) I tried to convince Chad to watch at least some with me, but no :) He also said if I blogged about it he'd stop reading my blog......hahahahaha. Glad to hear some husbands are not boycotting the event!!

I too got sucked into watching after not being really interested! The kids watched attentively, though it was a little long. Esben was the surprise. He was working that night, but looked at all the replays and photos on the internet the next day!
They were dressed modestly because it is freezing cold!
Jenny

Even at Ascot it is only considered proper if your shoulders are covered and dress is to your knees, it is only strictly enforced (along with wearing a hat) in the queen's box but I thought that was awesome that there is a regal recognition of modestly :)