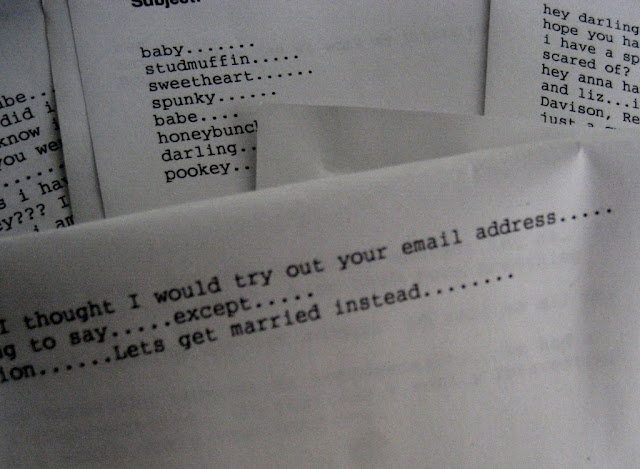 I blogged once about how  October was 'our' month
The one we got together and spent our first one on one time getting to know eachother.
Two weeks later in November we were engaged.

However, I remember our very first conversations were actually over email. In August.

This was back when email was a brand new thing and the screen was black with green boxy writing - I had to use the email at university - my family didn't even have internet! The Mr worked for one of the first internet companies in our City and he had an email address!! I knew hardly any other people who had an email address!! (OH the technology!!)

So one day at a function I said 'Give me your email address and I'll send you an email!!"
(oh the excitement of using said technology!)

I had forgotten just how awesome that correspondance was until I refound all 200 pages of them.

The Mr had the foresight to print out all our correspondance. Some of it is missing (mostly his replys - his work server had kept all of my emails, but I did not have the ones he sent me) so he was able to  print it out before all was lost. I'm so glad he did. This stuff is pure gold to me and makes me laugh and blush. I recently was unpacking old boxes and I found it.

It was just too hilarious not to share with you all.

If I thought October was our month...

August was the month I laid the trap.unknowingly.
It's just so obvious we were always meant to be. even when we didn't even know it.

So this month I shall share the most awesome emails between us. Oh we were a flirty duo!

And the very first email I sent The MR  (without knowing him very well!)

hey hey hey
How's things going? Well I thought I would try out your email address..... but I don't have anything to say.... except.....
Let's not go to convention... Let's get married instead....


Ha! OH YES I DID! Obviously I am pyschic and can see the future! (we did go to that convention but we were engaged!!) How crazy was I? And what a first email to send someone. Unfortunately the emails with the replys we do not have!! I wonder what he said back in return.. If only I could remember!!

I'm sure it was something on the lines of 'sure thing!'
Posted by This Girl loves to Talk at 10:58 AM