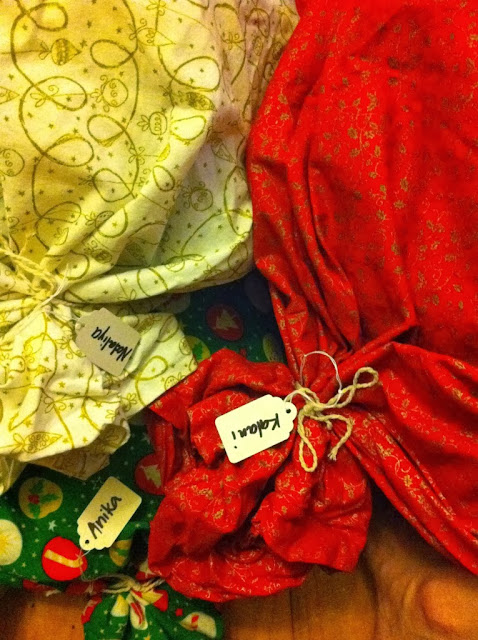 When your kids are little and are more impressed with the wrapping than the gifts did you ever just think about wrapping up toys you already had? {I'm not the only one surely?}

Have you ever recycled a Christmas gift?


The only recycle I do is that every year I re wrap the kids photo albums.

Yep. I take their photo albums {regular slot the photos in the pocket style} off our bookshelf and I re wrap them and put them under the tree. Except that I also print off the best photos of the year of each girl and slip them in {about 30 photos each}. But they are the same albums. Re wraped and put under the tree. I've rewrapped the same albums for about 4 years now.

Since the most used Christmas gifts from last year were the fabric notebook holders I made - I've been thinking about also re gifting those with new crisp notebooks and fun pens placed within. Perhaps tucking some fun stickers or something unexpected will also increase the excitedness value.

I've also loved the hairband organiser (my sister found) I got them full of clips, bows, headbands, hairbands last year. Sadly as with every year half of them are lost and the organiser is almost empty. I'm thinking of restocking it and rewrapping it to go under the tree. Full of fresh hairbands for the new year/school.

A few years ago my mother in law rounded up a box of old costume jewellery, plastic glasses, gloves etc from around her house and gave it to the girls as a Christmas party gift. It  kept them busy and made for a fun night of playing.

I've also thought it would be fun to have one of those joke gifts that is something just crazy stupid that gets re wrapped every year and gets given to someone unsuspecting in the family.

Each year I also think about doing the parade of animals like O Happy Day . I think it was a genius idea - they used existing toys they had and put them under the tree because a) they lived in several teeny apartments and b) anything they bought in France had to be shipped home one day... and what animals don't look cute lined up with bows under the Christmas tree. If my kids were still toddlers I would totally do it! All our miniature animals and dinosaurs would look so cute lined up.


So what's your take on Re wrapping, Re gifting or Recycling Christmas Gifts for kids.

Would you do it? Are you doing it this year?

Looks like I might have 3 recycled gifts under the tree this year.
Posted by This Girl loves to Talk at 1:46 PM