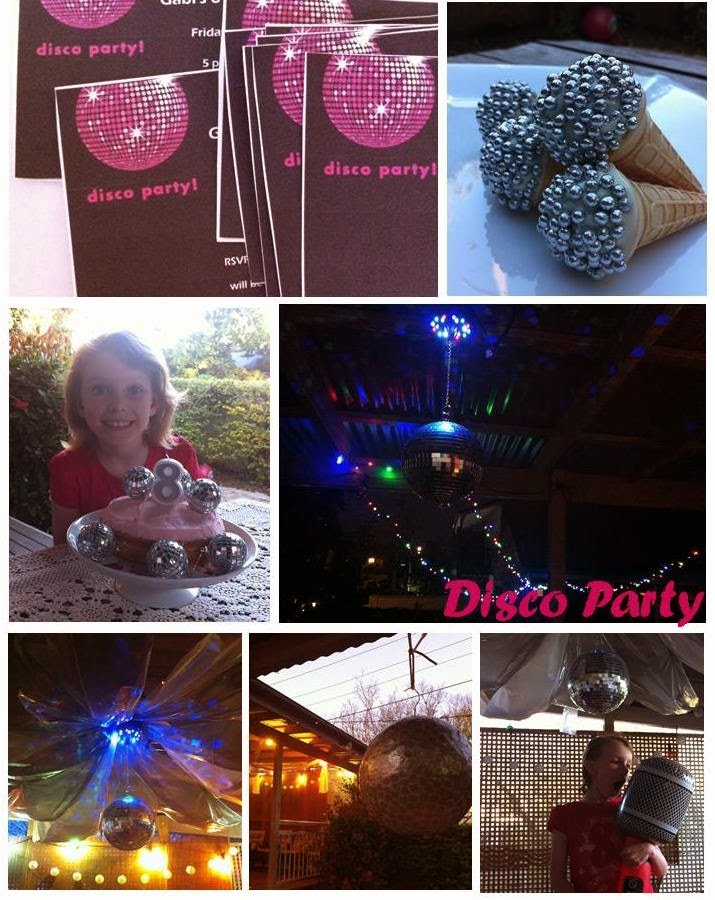 I was a little stumped on how Miss G's birthday party was going to go.

No theme, date, reason etc. And the fact that she will now sort of have 3 celebrations!

We slowly got going with a sort of theme and it was all engines steaming.

Without a theme I feel lost in the sea of uncertainty.

Once she chose a theme, all stations go, 10 mins on pinterest and done.


Well not quite done, but a piñata, theme food, games. Done. Thank you very much.

We already had the disco ball languishing in the cupboard.


So if interested here are some of the details of the party close up:

Can't be a party without a piñata! Once again I may have made it a bit tough ;) Each kid got about 5 strikes with the stick so the thing got about 100+ hits before it broke. However they loved it.
My neighbours were probably all wondering what was happening with a hoard of kids yelling "Smash it, Smash it, Smash it" at the top of their heads repeatedly. 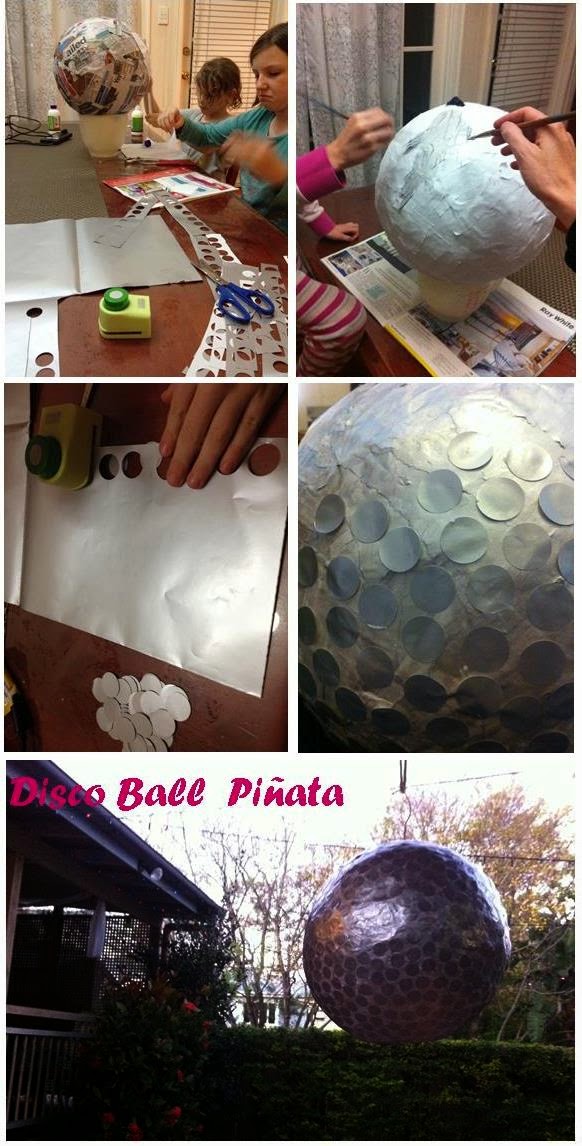 I bought a larger size balloon from a party shop to make this piñata.
Glue 3 layers of newspaper and one layer of white copy paper {to make painting it silver easier}. When dry, paint silver.
Stick hundreds of silver circles all over.
The idea I saw recommended giant silver sequins. I was unable to find those so used my round punch to punch out circles from some silver wrapping paper {I used 2 sheets}.
You can't tell in the photo but I then painted it with some glitter paint to give it shine.
Almost a pinterest fail since it resembled a golf ball more than a disco ball, but Miss G gave it the thumbs up approval. 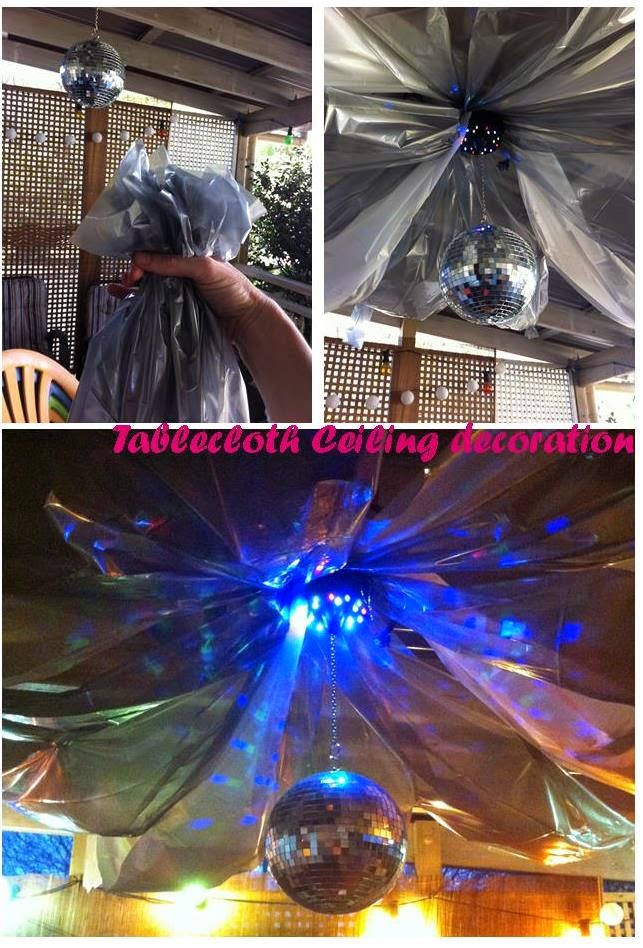 I saw an idea on pinterest about using dollar plastic tablecloths to make a ceiling decoration.
Mine almost turned out pinterest fail as the silver tablecloths looked like plastic shopping bags and it was pretty messy but Miss G insisted it was wonderful so it got to stay. {I was about to pull it off}
Brighter colours work better for this - see here
Basically buy some plastic tablecloths and cut each one into 4 long strips.
Gather all the strips together and tie with string/fishing line.
Attach to the roof.
Pull each strip out to desired distance and attach (I used tacks)
Keep going till all strips are fanned out. 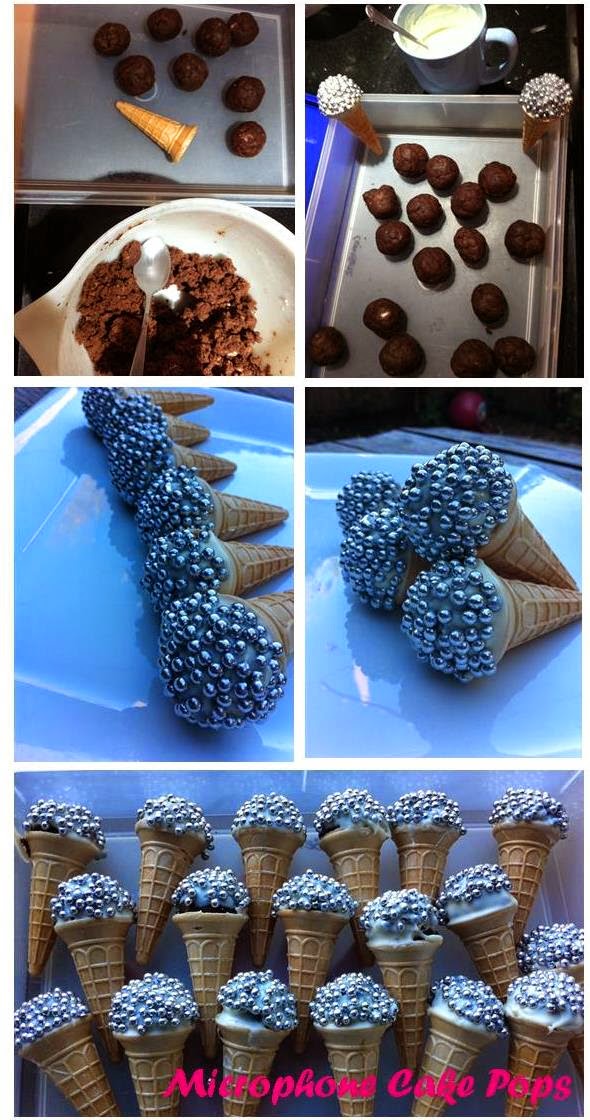 Probably the easiest cake pops I have ever made.
I crumbled a shop bought chocolate pound cake and mixed it with 3 tablespoons of cream cheese. Rolled into balls.
Dipped a bit of the ball in melted white chocolate and stuck it in a mini icecream cone.
Let set then dipped each cone in white chocolate, let drips run off  then dip in silver sugar balls.
Voila - Microphones.
These were my one novelty food. I try to keep it simple at parties. Kids don't really care.
We served individual packets of chips, poppers, strawberry cupcakes (birthday girl request) and chicken nuggets later in the cool of the night. 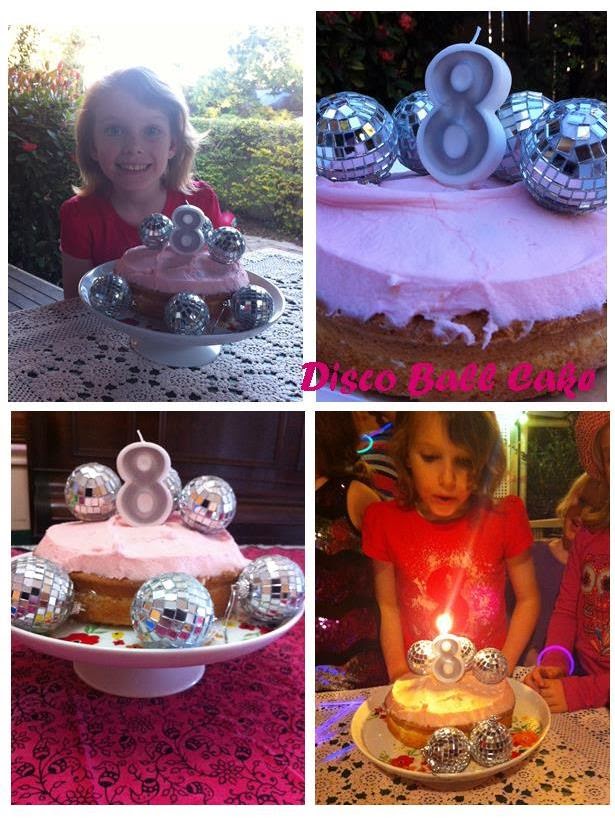 Some years I have the energy for cake, some years I don't. I've been busy with working now and life so it was a shop bought cake with disco ball decorations. So Easy!  I actually had to stop a few kids from trying to steal the disco balls, they liked it so much. They had tiny string on them and I thought would be awesome Christmas baubles so I wanted them for myself!!

We played pass the parcel, piñata and donuts tied to a string and you have to eat them with your hands behind your back. The kids loved it all and actually many of them have not played these types of games before. They also played in our tree house that had fairy lights strung on it. Party only went for an hour and half in the evening, so this was the perfect amount of games and pretty easy.
We had music playing  and a disco ball and fairy lights strung up. They didn't dance as much as I wanted but we had a few songs that made them cheer and move it.


All up we survived 20 plus excitable screaming kids. Phew!

The birthday girl was suitably spoilt and all her friends came for a Friday night end of school term party and had a blast. She said it was fantastic and that's the best a mum can hope for. Bless xx

Posted by This Girl loves to Talk at 8:56 PM

I love reading all about your celebrations, just magical! You have created such happy memories for your girlies. I have 2 little girlies and last year we started your lovely tradition of sleeping under the Christmas tree on the 23rd dec, we had a truly magical evening, thank you! Best wishes, Rebeckah x