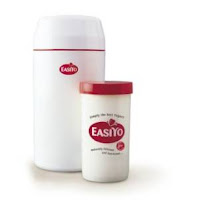 
Ok I was inspired months ago after reading this post by Kashann to start making yoghurt for our family... but most recipes suggest having a candy thermometer... which I don't - so I lazily postponed my venture into the world of dairy creating...

well not anymore.. after this week when a mum came to mothers group with a beetroot dip (you rock Jenny) that was homemade.... then she said she even MADE the yoghurt!!! What!? Now that is ultra domesticated!! So I research some recipes. I tried this one from Hillbilly Housewife featured on Blue Yonder that suggested just putting the ingredients in a jar, then place in a warm oven overnight... but I think because it is winter here, the oven didn't stay warm enough... so I woke up to a runny milk mixture that tasted like yoghurt! But never fear Hillbilly Housewife to the rescue with a recipe that uses failed yoghurt attempts! Custard Style Yoghurt

But today I got out my trusty easiyo maker (really a glorified themos) and made yoghurt - that turned out nice and thick!! YAY!! Success!!

Here is the recipe I used.
3-3/4 cup tap water
1-2/3 cups instant nonfat powdered milk
2 to 4 tablespoon store-bought, plain yogurt with active yogurt cultures (read the label to be sure) You can freeze the rest of the store bought yogurt in ice cube trays to use in later homemade batches.

I placed above ingredients into easiyo, which you then pour boiling water around and leave for 6-10 hours, when thick - refridgerate.

Above mentioned friend who found her easiyo missing, just used a container with lid and placed into drink cooler/esky etc and poured boiling water around it. (The smaller the container the better) to keep it warm.

Once it is made you can add flavouring - vanilla, sugar, honey, jam, maple syrup etc.

Good Luck... and don't be scared off if your first attempt fails!! Because at around $1 a litre... you can't beat that! Especially if you have crazy hungry kids!
Posted by This Girl loves to Talk at 7:47 PM

Hey - i never thought to make yoghurt without the easiyo packet. It's been sitting in my cupboard because i couldn't get packets here! I'm going to try it and see how I go :)