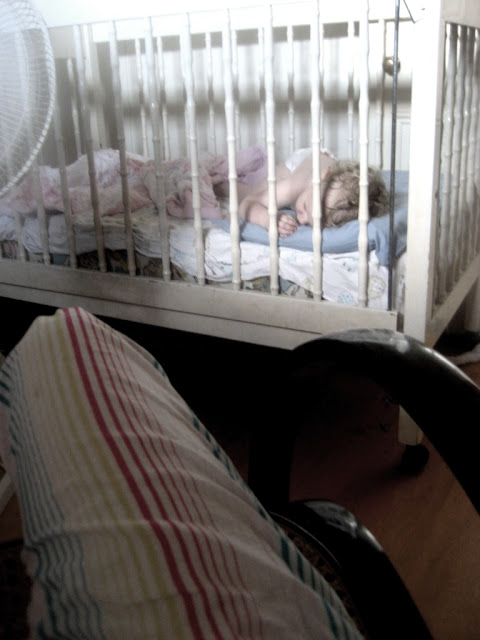 I did have one new years resolution this year (see I lied!)

Not to nurse Miss N in the middle of the night anymore.

Daytime feeds finished a couple months ago. This was our one last wall of defiance.

The rocking chair was moved in her room to make way for the christmas tree in the lounge.

I have never sat in it so much as I have these last 10 days. It's racking up the rocking mileage.

Once upon a time I had a baby that slept through the night from 3 - 7 months old.

Then she got teeth.

And like a revolving door round and round I went.

I trialled contolled crying a few times only to have her fall out of routine once again.

I would just give up and give in

=  never getting a full nights sleep since. Waking up to 1-3 times a night was normal round here.

I decided New Year was a perfect time as any to start once again. This time I would offer her a waterbottle (which the first few nights made her as mad as anything) then I would sit with her in my lap in the rocking chair.

Well things have improved alot but we haven't reached the 100% sleeping through the night. I have heard her wake and put herself back to sleep so that is good. The downside was for several days she thought 4am ish was a perfect time to wake up (she could not be put back) and she was HUNGRY. So while she's eating breakfast I'm watching tv.

You wanna know whats on at 4:30 am.  Baywatch! that's what. Old original episodes.

That and I have been catching up with all my american morning news shows. The early show and Today.


At first I was so proud of my efforts regarding this and thought Yay! my body is mine again!

Take that body stealing babies. 6 years + of my life devoted to feeding babies.

Then it hit me like a tonne of bricks I may never nurse another child again.

and then I cried.


Even though I would chastise myself for being such a pushover I've thought: she gave up her dummy at one (well because I was her dummy, she didnt need it) she's never had a bottle and most probably never will. So even though these last 6 months were a challenge in weening - I think I've done it the best way. Only one and a half and she has no other 'dependents'
Posted by This Girl loves to Talk at 11:59 AM

I sure don't miss that early morning rubbish on TV! That time when you are so tired, but there is little point going back to bed because the others will be awake soon!
I thought that I would mourn the end of breast feeding, which I enjoyed, but then I realised there would also be an end of nappy changing, and an end of waking through the night (I'm still waiting for that one, I wake without the children's help!)
I guess we just need to enjoy the moment, and know that more great moments are just around the corner!
Jenny