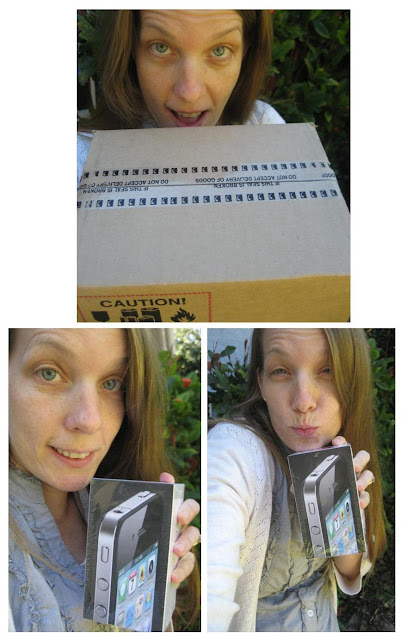 when my new phone was delivered 3 weeks ago, except it was faulty,
and I'm still waiting for the new one. Maybe today?

I can now offically say I am a MAN!


I'm feeling a similar thing now I am getting my first phone!


Well it's not 'technically' my first, I've had two old handme downs over the years for 'safety purposes' that were never used well, cause nothing ever happened to me and they sat uncharged at the bottom of my handbag for 3 months :) I firmly stated that I would not get another phone until it was one with lots of minutes, internet and basically something that can run my life. Because if the thang never rings, it sits uncharged at the bottom of my bag!!

So I am now entering the grown up world of the technologically plugged in.

I have no idea what I'm doing and I've never sent a text in my life! It's definately going to be a learning process. Lets hope I don't lose it! I'm sure that would happen to me as I rarely have clothes with pockets and seriously my handbag is a mess!


I'm kinda happy and I'm kinda sad about this development.

It truely is freeing to be 'incommunicado'   I can go out and know that noone will bother me.

I plan days and don't change plans if it affects others (because I won't be able to tell people) or when no one cares, I change plans all the time because well,  no one is calling me.


I don't lay in bed checking the thing


My life is pretty much perfectly fine without a phone and I'm worried about addictions that are sure to crop up now I have a phone :)

The only thing I feel a little guilty about is not being contactable if something were to happen to my children at school (though I figure their FATHER is VERY contactable and he would swoop in a save the day if needed) but in 10 years  there has only been One Incident! and I was tracked down in 10 mins flat anyway at a friends house!  I'm usually home by lunch each day (nap time for little ones) and have been known to joke to my older ones - don't get injured or hurt till after lunch time.

So people here it is.

Addiction? I literally sleep with my iPhone under my pillow! Congratulations!!! I want your number!!!

Oh my gosh, you will LOVE it! We didn't have phones either until 2 years ago - we help off and off and off, and now I don't know how we lived without them! We got rid of our home phone and just have the cells. I love love LOVE having the internet on mine - when you are out shopping and see something you want to buy, you can pull out your phone, scan the barcode and see if it's cheaper somewhere else! Or look up reviews of it to see if you REALLY want it. Or when you're at a concert at school and your little ones (my 2 boys) are bored out of their brains and driving you crazy you hand over your phone to them and they can play a game (you can get tons of free ones) and you can enjoy the concert in peace and quiet. Works well at Activity days too when little boys want to get all in the girls' business - hand over the phone and they huddle in a corner and you don't know they're there. Ask me how I know all this? lol! But best of all, you can send hubby little texts saying you love and adore him while he's at work. And he too, back to you of course!

Hi Bobbie,
I'm the same - uncharged, never used "emergency" phone at the bottom of my handbag. I can relate to having set plans etc (I have however sent a text before) - But . . . you are ten years younger than me! Doesn't that make you generation y? Finally you are acting your age!
Jenny

Congratulations on your new phone. I love mine and can't believe I lived life without one. The other day my navigation system on the car was not working and my phone saved me.